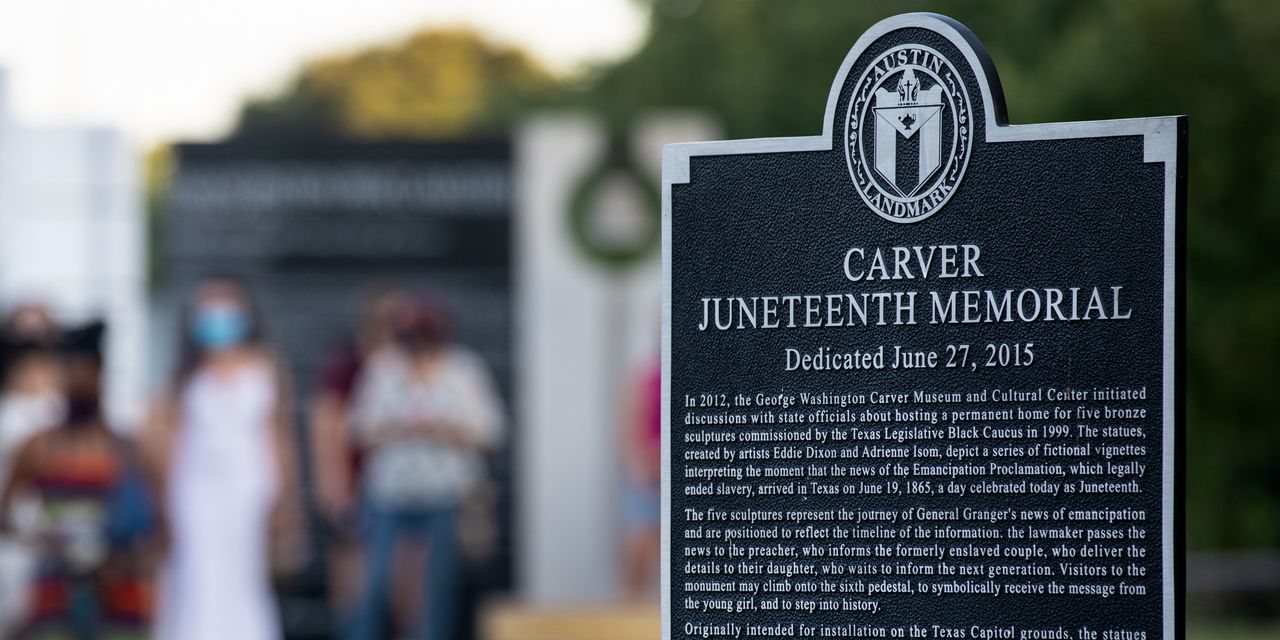 The Juneteenth holiday commemorating the end of slavery in the U.S. is now a new federal holiday after President Biden signed a bill into law on Thursday afternoon, making it a holiday on a par with Memorial Day, Independence Day, Labor Day, and the 10 federal holidays.

The move comes after the House on Wednesday voted 415-14 to make it a national holiday.

However, from a Wall Street perspective, there’s no guarantee that that day will immediately translate to a day officially recognized on Wall Street, if the Martin Luther King Jr. holiday is any guide.

Juneteenth, which is celebrated annually by many on June 19, is a day commemorating the end of slavery in the U.S. in 1865. It was on that date that Union Gen. Gordon Granger read the Emancipation Proclamation to African-Americans in Texas, roughly 2½ years after the proclamation was issued on Jan. 1, 1863.

The Securities Industry and Financial Markets Association, a brokerage-industry trade group that recommends actions for the bond market, including recommending holidays for those who trade fixed-income assets like the 10-year Treasury
TMUBMUSD10Y,
1.516%
and 30-year Treasurys
TMUBMUSD30Y,
2.112%,
said that Juneteenth would be incorporated in its holiday schedule in coming years.

“If Fedwire is operational SIFMA won’t recommend a fixed income market close,” according to the statement.

The Sifma spokesman said that given that June 19 this year falls on a Saturday this year and the Fedwire remains open, therefore Sifma won’t recommend a closure.

READ ALSO :  What a COVID-19 vaccine would mean for mortgage rates and the housing market

A person familiar with the New York Stock Exchange, owned by the Intercontinental Exchange
ICE,
+0.16%,
said Wall Street venues would need to convene, including Nasdaq Inc., to determine a closure plan.

Someone familiar with Nasdaq’s plans said that they commend the government for making Juneteenth a national holiday but said that making it a day off needs to be coordinated with other exchanges and wouldn’t be possible this year due to derivatives contracts and other settlements that are already set for Friday, a large options and futures expiration day, and Monday.

John Jacobs, executive director of the Georgetown Center for Financial Markets and Policy, said that it is about coordination for the exchanges.

“There will be a lot of conversations about how to reconigze this holiday,” he said.

The former chief marketing officer of Nasdaq says that the exchanges need to set their holiday schedules and the Securities and Exchange Commission and the Commodity Futures Trading Commission need to weigh in to approve holidays on those venues. “The regulators would want to make sure that the coordination and plumbing is set up,” he said.

Of course, these trading platforms, which help to determine values in the Dow Jones Industrial Average
DJIA,
-0.62%,
the S&P 500 index
SPX,
-0.04%
and the Nasdaq Composite Index
COMP,
+0.87%,
aren’t obligated to close just because a federal holiday has been declared.

For example, a market closure for King Jr.’s birthday, honoring the slain civil rights leader, is a relatively new development. When the holiday was signed into law by President Ronald Reagan in 1983 and officially established in 1986, the NYSE and other major exchanges remained open, observing a minute of silence at noon.

It wasn’t until Jan. 19, 1998, that the NYSE and Nasdaq first said they would allow for the full day off.

Jacobs said that the stock exchanges are all “about tradition,” noting that Good Friday, which isn’t a federal holiday, has long been observed on equity markets.

The Wall Street Journal notes that Juneteenth is observed at 9% of businesses, citing a survey conducted this year by employer consulting firm Mercer LLC.

Last year, in the wake of the a series of deaths of Black Americans, highlighted by the killing of George Floyd, a Black man, who died as a police officer knelt on his neck, Amazon.com
AMZN,
+2.17%
named Juneteenth a day of edification, urging employees to attend “learning opportunities,” to recognize the end of slavery in America. Some other companies also gave employees the day off or recognized it in some way.

To be sure, there isn’t always holiday uniformity on Wall Street, and in the business community as a whole.

Veterans Day, which is meant to pay homage to U.S. military servicemen and service women, used to be celebrated by stock and bond markets alike, starting as far back as 1938 (some put the date to 1921). But over time that has changed.

Petrol, Diesel To Cost More In Mumbai, Bengaluru, Kolkata Due To Hike In Vat: Check Prices In Your City

To start, there are three things you can do from home with ease. Source link READ ALSO :  …
0

Treasurys at these rates? JPMorgan’s Jamie Dimon ‘wouldn’t touch them with a 10-foot pole’

Ask us: on investments