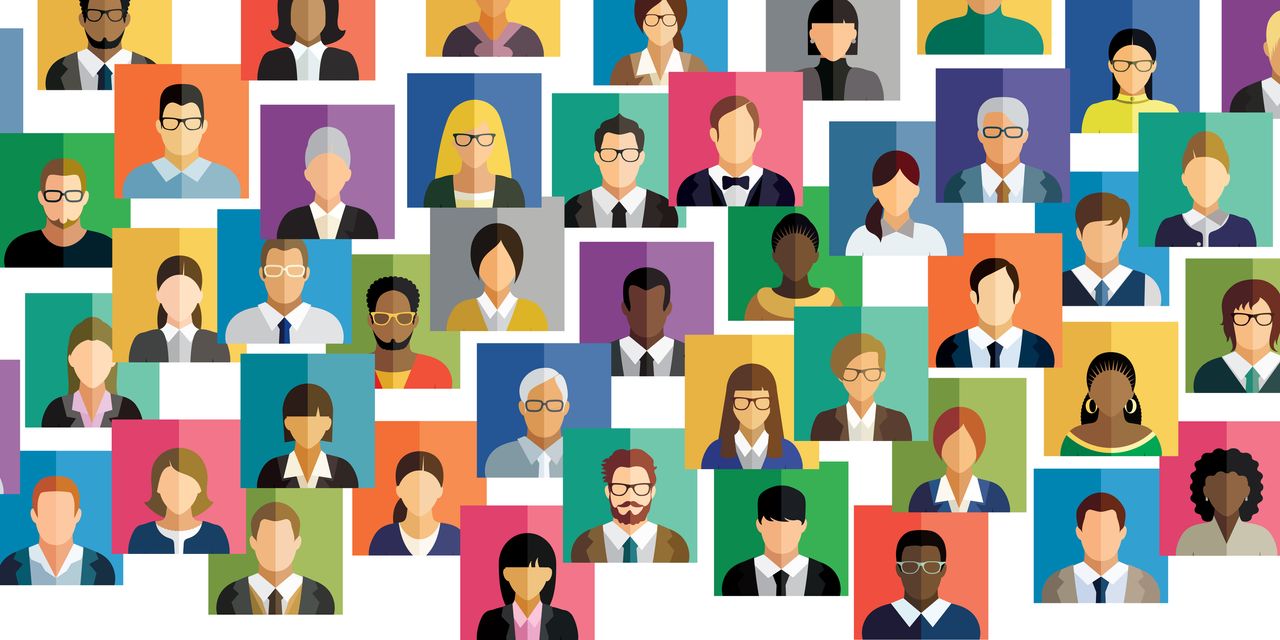 As they face continued calls to diversify their workforces, technology companies are increasingly disclosing demographics and pay information, but for the most part those numbers have shown little progress — and high-profile controversies continue.

Facing pressure for the past decade, tech companies have exhibited more willingness than other corporate sectors to reveal diversity statistics. As You Sow, a Berkeley, Calif.-based shareholder advocacy group, recently ranked companies based on the amount of diversity, pay and other information they release, the effectiveness of their recruitment and retention efforts and the goals they have set.

Tech companies comprised seven of the top 10 scores, with Intel Corp.
INTC,
-2.82%
and Google at Nos. 1 and 2, respectively. Their scores were 68% and 63% respectively, reflecting the fact that tech is doing better than other sectors in disclosing diversity information but still not scoring high marks.

While Google received a high score from As You Sow and often touts its efforts to diversify its workforce, its overall Black employee representation has inched up from 2% in 2014 to just 3.7% in 2020. Gains in Latinx/Hispanic representation were better, going from 3% to 5.9% over the same six-year period. U.S. Census Bureau numbers show overall U.S. Black and Latinx/Hispanic populations at 13.4% and 18.5%, respectively.

“We’ve seen a lot of reasonable pressure on tech companies around [diversity, equity and inclusion] lately,” said Meredith Benton, a consultant with As You Sow and principal at Whistle Stop Capital. “For historical and recent reasons.”

Those recent reasons include high-profile racial controversies at some well-known tech companies, including Alphabet Inc.’s
GOOGL,
-0.19%

GOOG,
-0.23%
Google. Less than a month after As You Sow’s rankings were released, Google came under fire for forcing out Timnit Gebru, a Black woman who was the co-lead of the company’s ethical artificial intelligence team. Her departure inspired another Black former Google employee, April Curley, to speak out about her firing in the fall. And a few hundred Google workers announced earlier this month that they have formed a union, driven in part by inclusivity issues.

There are examples of employee departures under similar circumstances at other tech companies, even as those companies dutifully report their workforce demographics. Their allegations of discrimination and retaliation belie the companies’ diversity efforts and call into question the policies and priorities of those in charge of the technology that affects us all.

These controversies highlight that simply tracking numbers isn’t enough, and that “there are not enough Black and brown people at the highest levels” at the tech companies, said Ellen Pao, who sued storied Silicon Valley venture capital firm Kleiner Perkins in 2012 for gender discrimination, during a recent panel discussion. Pao is now chief executive of Project Include, whose goal is to push companies toward “true diversity.”

Benton and others say tracking the numbers matters and is just one part of the bigger picture.  “A company’s DEI programs are material,” she said. “There’s a ton of research that links long-term DEI with success of companies.”

That’s why the push for diversity is wide-ranging. The influential Silicon Valley Leadership Group this week announced an initiative urging its member companies, which number in the hundreds and include Big Tech, to fill 25% of their executive positions with those from underrepresented groups by 2025.

READ ALSO :  How did Intel lose its Silicon Valley crown?

“The numbers and data dispel the notion that diversity is not connected to a business case,” SVLG Chief Executive Ahmad Thomas told MarketWatch. He said that as a Black person, he believes it’s “the right thing to do,” but that ultimately “business competitiveness drives this” new effort.

In addition, investor groups are pressuring companies in different sectors through lawsuits and shareholder proposals. Nasdaq Inc.
NDAQ,
-1.47%
has proposed diversity requirements for boards of companies that list on its exchange. And this year, Goldman Sachs Group Inc.
GS,
-2.23%
will now only underwrite initial public offerings of companies with boards with at least two “diverse” board members.

As You Sow ranked companies based on the diversity, equity and inclusion information they share and more. These tech companies were among the Top 10.

Source: As You Sow, published November 2020

Accounting for 20% of a company’s score in As You Sow’s rankings was whether a company released its EEO-1 report, a federal filing that breaks down workforce and leadership demographics that include pay data. The group recently started tracking the companies that release their EEO-1s, which companies must file with the Equal Employment Opportunity Commission but aren’t required to share publicly.

When it started in August, As You Sow identified 22 members of the 100 largest S&P 500 members that were releasing their EEO-1 forms. In November, when the group made its database public, 42 companies were releasing, or had committed to release, their EEO-1s.

“That’s a massive shift in a short time, reflecting societal shifting expectations and an increased depth of understanding on the materiality of these issues by investors,” Benton said.

Is disclosure making a difference?

Tech companies began regularly disclosing diversity numbers after pressure from the news media and advocacy organizations such as Jesse Jackson’s Rainbow PUSH coalition. Google was among the companies that fought a 2008 Mercury News lawsuit over releasing its numbers, but finally did so starting in 2014. Other tech companies followed suit, but the industry’s progress in hiring and retaining Black and brown employees has been mostly incremental, data show.

The Mercury News found that in 2008, “computer workers living in Silicon Valley who are black or Latino was 1.5 percent and 4.7 percent, respectively.” Today, at 15 well-known tech companies, the average overall Black representation is 5% and Latinx/Hispanic representation is 7.3%, according to MarketWatch tabulations. For tech roles, those averages are 3.3% and 5%, respectively.

Some companies are doing better than others both in terms of numbers and public perception.

READ ALSO :  What could rattle markets in 2021, even as vaccines are rolling out

This month, the chip giant announced that it is working with other companies on developing a global inclusion index and on setting common goals. Its own goals include doubling the number of women and underrepresented minorities in senior leadership roles by 2030.

Another possible catalyst for change is more minorities starting their own companies. Among Intel’s efforts is investing in tech startups led by women and underrepresented minorities. Since 2015, the company says Intel Capital has invested more than $400 million in such companies.

Lisa Lambert, a black venture capitalist who is chief technology and innovation officer at National Grid and founder and president of National Grid Partners, founded and was managing director of the Intel Capital Diversity Fund.

When Intel announced the fund, Lambert said it was common for VCs to say they “didn’t invest in women and people of color because they’re not out there.”

“As soon as we announced it, two months later, we had over 600 business plans from women and minorities,” she said in an interview with MarketWatch. “To say there’s a pipeline issue is the biggest fallacy. There’s an access-to-capital issue.”

“Hopefully, the numbers speak for themselves,” Dalana Brand, a vice president and head of inclusion and diversity at Twitter, said in an interview with MarketWatch. She said the company combines recruiting efforts to attract diverse talent with “programs that ensure a culture where people can be their authentic selves and belong.”

“We take belonging very seriously at Twitter,” Brand added. “It really drives all the actions we take.” Because of the social justice issues that arose this year, she said the company “did a lot to really focus” on what Black employees were going through. One example: Twitter and the Blackbirds business resource group rolled out a program that helps employees who want to find Black therapists.

In an unusual move, Twitter announced last year that it would pay its business resource group leaders for the work they do. At most other tech companies, that work goes unpaid.

Mark Luckie is a former Twitter employee who has also worked at Facebook and has written a novel called “Valley Girls” based on his experiences. When he left Facebook in 2018, he published a post criticizing the way the company treated both its Black employees and its Black users, saying it was “failing” them both.

On the other hand, Luckie said Twitter listens to its employees, and that it shows. After years of being asked to remove President Donald Trump, Twitter banned him from the platform two days after his role in the Jan. 6 insurrection at the Capitol — and after hundreds of Twitter employees wrote CEO Jack Dorsey urging to finally take permanent action. Luckie acknowledged that activists have targeted Twitter for a long time over its failure to ban white supremacists and others, but said it had lately been leading the way among social media companies in moderation and other issues.

“You can see the power of Black Twitter play out in features like Trending Topics,” Luckie said in an interview with MarketWatch. “You can see what’s happening in your community.”

He added that Twitter was the first to institute blocking features in response to the harassment of women and Black people on the platform, and that other companies usually followed Twitter when it comes to flagging and removing questionable content.

Steven Renderos, executive director for MediaJustice, a nationwide organization based in Oakland, Calif., that advocates for justice in media and technology, agrees — to a point. Twitter did start labeling misinformation by Trump first, he acknowledged in an interview before the siege at the Capitol.

“When it comes to tech companies listening to the concerns of people of color, the bar is so low that it’s not hard to stand out,” Renderos told MarketWatch. “Twitter has a slightly more diverse [executive team] than Facebook” and he said he could see how Black Twitter employees might feel more heard.

He added that, from his point of view as an “advocate for people of color demanding change from the outside, there’s only a marginal difference in their response to our concerns.”

For example, MediaJustice and other advocacy groups have been pressing Twitter over the access it provides a partner company that shares data about protesters with police. And in the wake of the insurgency at the Capitol, Renderos pointed out during a news conference last week by disinformation experts and advocacy groups that “race was at the core of Trump’s claims of election fraud. He challenged results in cities made up of people of color.”

The importance of a diverse workforce comes into play here, as employees are increasingly becoming uncomfortable with the race-related disinformation that their work has enabled.

“There’s something going on within tech. People who are building these products are essentially feeling as powerless as we are” and are leaking emails and conversations to the news media, said Joan Donovan, research director of the Technology and Social Change Project at the Shorenstein Center at Harvard, at the news conference.