A decommissioned guided missile frigate of the Godavari class was sunk.

In a video released by Indian Navy, an old, decommissioned guided missile frigate of the Godavari class has been sunk by an anti-ship missile fired by INS Prabal, a corvette.

According to the navy, ”the missile homed on with deadly accuracy at maximum range, sinking the target ship.”  The Prabal is armed with 16 Russian made KH-35 ‘Uran’ anti-ship missiles, believed to have a maximum range of approximately 130 kilometres.

The made-in-India Godavari class frigates of Indian Navy, one of which was sunk today, were first commissioned into the Indian Navy in 1983.  Frigates of this class, three of which were built, had a significant indigenous warship design and combined Indian, Russian and western weapons systems.

Two ships of the class, the lead frigate, Godavari and the second of the class, Ganga, were decommissioned in 2015 and 2018 respectively. One of these two ships are believed to have been sunk in these exercises.

On Thursday, navy chief, Admiral Karambir Singh, reviewed the operational preparedness and combat readiness of the Indian’s Navy primary combatants, several of which are now deployed in Naval exercises.  This includes the aircraft carrier, INS Vikramaditya and her battle-group which includes destroyers, frigates and other warships.  INS Chennai, one of the Navy’s most advanced destroyers, has also test-fired a BrahMos anti-ship missile during these exercises. 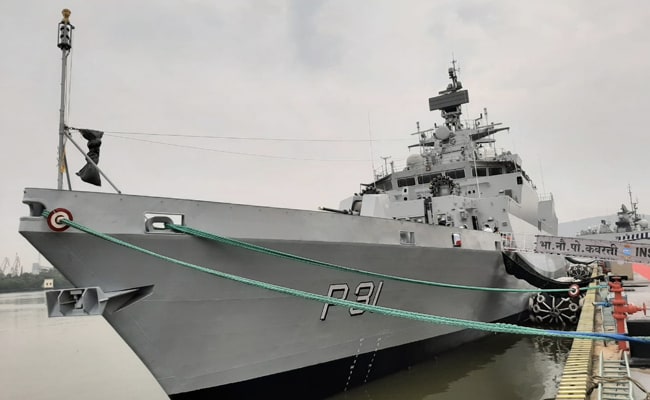 The navy inducted a new anti-submarine corvette, INS Kavaratti, at the naval dockyard in Visakhapatnam.

“Not Our Farmers, Punjab Responsible For Protest”: Haryana Chief Minister

Farmers Stay Back On Highways, Few Takers For Protest Site In Delhi

Mike Tyson versus Roy Jones Jr: Where and how to watch in India

Prev Next 1 of 3,729
You cannot print contents of this website.
Go to mobile version