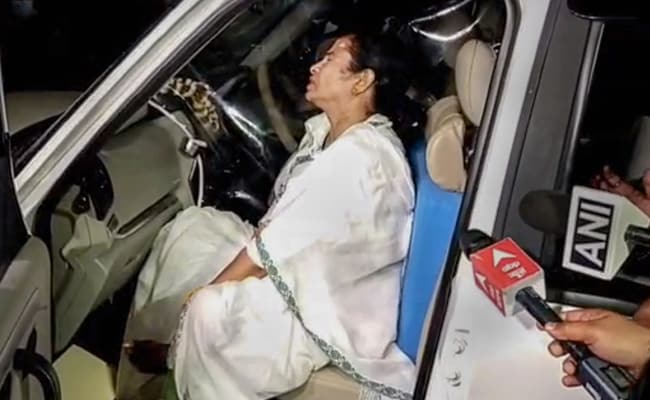 Bengal Assembly Polls: Mamata Banerjee alleged she was pushed by 4 or 5 people against her car.

A day after Bengal Chief Minister Mamata Banerjee alleged an attack in which she suffered injuries to her leg and neck, a vitriolic blame-game saw both her party and the BJP calling for an investigation. In letters to the Election Commission, the Trinamool Congress alleged “a deep-rooted conspiracy to take the life of its chief” and the BJP, which has accused Mamata Banerjee of lying about the attack, called for video footage to establish facts.

The Trinamool, alleging a “gruesome attack” on the Chief Minister, said an attempt was made on her life “within 24 hours of the removal of the Bengal police chief” by the Election Commission without the state government being consulted. The party alleged a “nexus” between the BJP’s complaints against the sacked police chief and the police being absent at the time of the incident. The party also claimed it had been tipped off about “anti-social elements” being mobilized and pushed into Nandigram from neighbouring towns.

The BJP, which has been openly skeptical and contemptuous of the Chief Minister’s attack charge, said in a letter to the poll body that it was “shocked” to see that Mamata Banerjee had been injured and she had alleged that she was pushed by some people. “This is a very serious allegation involving the security of the Chief Minister”, said the party, questioning how it could happen in the presence of top security officials and “thousands” of policemen. Seeking a detailed inquiry, the BJP said video footage should be made available in the public domain to clear the air.

“We will ask for a high level probe into the attack, how it happened, who was responsible…We will also demand that local police officers be suspended since this happened on their watch,” Bengal BJP vice president Pratap Banerjee told NDTV.

Mamata Banerjee, 66, said last evening she was attacked while she was campaigning in Nandigram after filing her nomination papers for the Bengal election. She alleged that she was pushed by four or five people against her car and had the door shut on her at a time when there were no police personnel around her. Asked if it was a planned attack, she said, “Of course it is a conspiracy… there were no policemen around me”.

This morning, Mamata Banerjee’s nephew Abhishek Banerjee, a Trinamool Congress MP, shared an image of her in hospital in Kolkata with a message targeting the BJP: “BJP brace yourselves to see the power of people of BENGAL on Sunday, May 2nd. Get ready.”

.@BJP4Bengal Brace yourselves to see the power of people of BENGAL on Sunday, May 2nd.

The Trinamool has delayed the announcement of its manifesto after the incident.

The BJP, which had blamed the Trinamool Congress after its chief JP Nadda’s convoy was attacked in December, accused the Chief Minister of pulling a stunt in sheer desperation after realising she could lose the election.

“Not one eye witness seems to corroborate Mamata Banerjee’s ‘attack’ version. People of Nandigram are upset and angry at her for blaming them and bringing disrepute,” tweeted Bengal BJP, posting what it said were witness accounts from the spot.

Not one eye witness seems to corroborate Mamata Banerjee’s ‘attack’ version. People of Nandigram are upset and angry at her for blaming them and bringing disrepute.

Clearly she is nervous about her prospects in Nandigram and has now lost confidence, if any, of the people too… pic.twitter.com/vBFFjbt1UF

Referring to the image tweeted by Abhishek Banerjee, Bengal BJP chief Dilip Ghosh said:  “It needs to be seen whether it was a true incident or a well-scripted drama. The people of the state have seen such drama earlier too. Those who know they would be voted out of power can stoop to any level to get votes.”

The Election Commission has asked the Bengal administration for a report by Friday.

The fresh round of allegations underscores the acrimony in the Mamata Banerjee versus BJP fight that is the theme of the Bengal election starting March 27.

Nandigram, where the Chief Minister is pitted against her one-time trusted lieutenant turned BJP rival Suvendu Adhikari, is the blockbuster battle of these polls.

The election result will be declared on May 2.

“Deal Firmly With Violations”: Centre To States Amid Surge In Covid Cases

The chief secretaries briefed about the current situation in the states. (File) New Delhi: The Centre on Saturday …
1