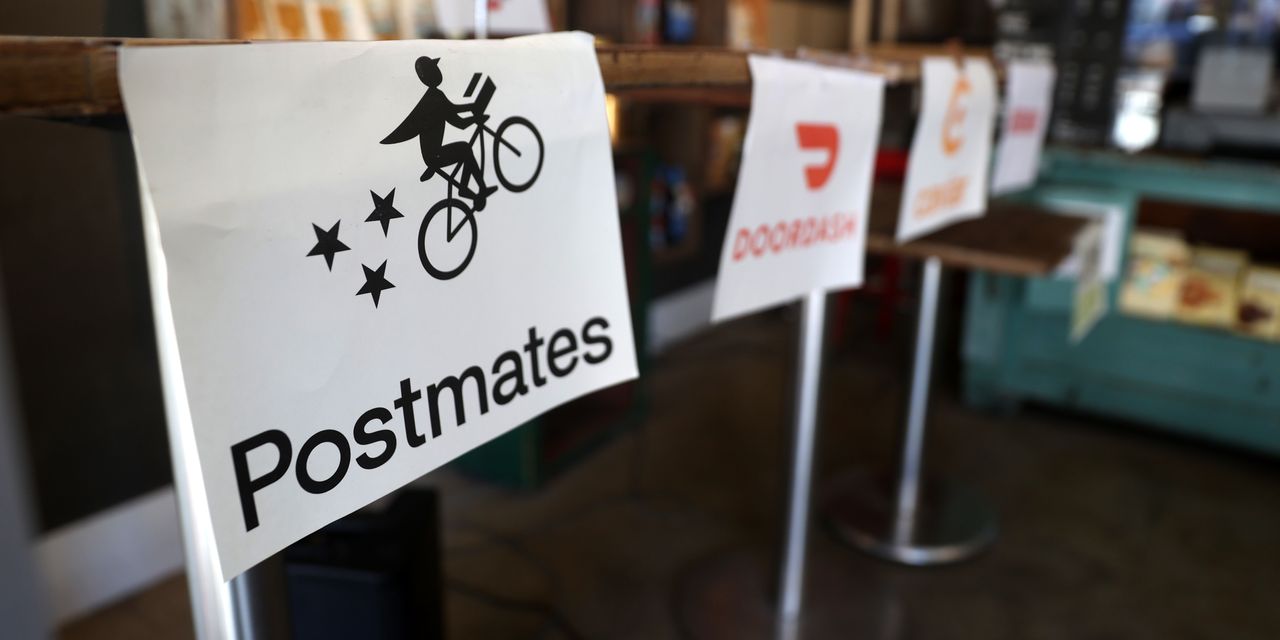 On March 17, the day the San Francisco Bay Area became the first major metropolitan area to enact a shelter-in-place policy due to the COVID-19 pandemic, Postmates Inc. engaged a bank to lead it to either an IPO or an acquisition.

As the pandemic stretched on, Postmates’ sales doubled, and eventually a monthlong bidding war ensued between Uber Technologies Inc., blank-check companies and the IPO market, according to an Uber filing with the Securities and Exchange Commission that was made public Friday. Uber
UBER,
+3.32%
eventually won the bidding in early July with an all-stock deal that valued Postmates at $2.65 billion, roughly 40% higher than the first bid Uber made for its fellow San Francisco gig-economy unicorn the previous summer.

Two unnamed special-purpose acquisition companies, or SPACs, offered valuations topping $2 billion, but after Uber’s negotiations with GrubHub Inc.
GRUB,
+0.26%
fell apart in early June, Postmates and advisor JP Morgan navigated dual paths of negotiating a deal with Uber and prepping for an IPO. As COVID-19 reared its head in the Southern United States in late June and created new concerns for Wall Street, Uber and Postmates got serious and worked out the deal.

Uber’s 388-page SEC filing provided a public glimpse into Postmates’ financial performance, showing that the delivery service doubled its sales amid the pandemic but kept losing money. Postmates was founded in 2011 but has never made a profit, losing a collective $929.3 million as of the end of June, according to the filing. The company, whose couriers deliver prepared food and more, posted revenue of $160 million in the quarter ended June 30, more than double the $71.4 million in the year-ago quarter.

The extra revenue and a healthy cut to sales and marketing in the last three months before Uber announced its acquisition in early July meant Postmates lost $32 million, nearly a quarter of its $116 million loss last year. Uber also more than doubled its delivery business in the second quarter, at a much larger scale, to $1.21 billion, which is more than seven times Postmates’ revenue. Uber reported an adjusted-Ebitda loss of more than $230 million in the quarter for Uber Eats, reflecting why delivery is still questioned as a profitable business model.

If the deal goes through, the combined company would gain on food-delivery app leader DoorDash and its 45% U.S. market share, according to Edison Trends, which sees a combined Uber and Postmates taking 37% of the market. GrubHub, which eventually was bought by Just Eat Takeaway
TKWY,
-0.50%

As of June 30, Postmates had about 12.6 million active customers (those who had placed orders in the past 12 months, notably higher than the 10 million reported at the time the acquisition was announced in July) and more than 550,000 contractor delivery workers, the filing showed. Those numbers were encouraging to analyst Dan Ives of Wedbush Securities.

“The growth rates and metrics show some underlying strength that is better than the Street was anticipating with the curtains now pulled,” Ives said Friday, adding that the numbers should make Uber investors feel better about the acquisition. “We believe this asset could help Uber accelerate its path to profitability on food delivery by 6 to 12 months.”

Uber’s purchase of Postmates is pending approval by Postmates shareholders and U.S. regulators. The companies disclosed in Friday’s document that they have fielded two requests for additional information from the Department of Justice, the latest on Sept. 9.

As part of the Uber-Postmates agreement, Uber agreed to loan Postmates up to $100 million in operating expenses for the next 12 months; if the deal does not go through, Uber agreed to pay a $145.8 million breakup fee minus whatever amount had already been loaned with interest.

According to the filing, Uber and Postmates walked away from talks about a possible merger in July of 2019, with Uber making a preliminary bid of a $1.9 billion valuation. Postmates received two offers from special purpose acquisition companies, one aiming for a $2.3 billion valuation and another for a $2.5 billion valuation, in early June.

Covid-19 Fallout: J&K To Cut Expenditure Within 20% Of Budget Estimates In Q1

Employee cost in respect of wage arrears, LTC, Leave encashment, might not be made through the interval of …
0

Earlier the Centre had reserved solely level-Four jobs for the J&K residents, which is equal to the rank …
0