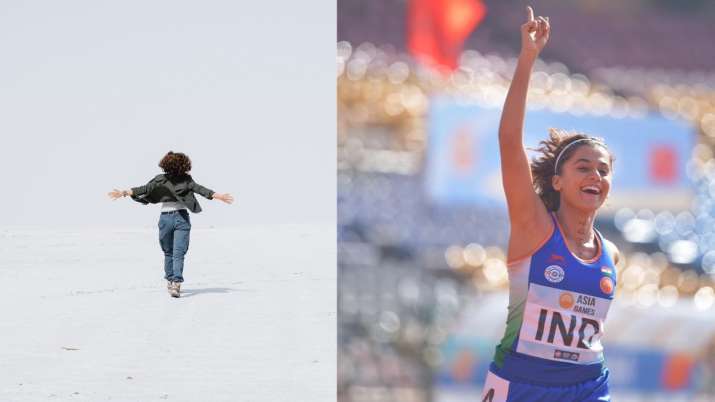 Bollywood actress Taapsee Pannu has wrapped up the shoot of her upcoming film Rashmi Rocket. The actress was shooting for the film in Gujarat. Taking to her Instagram handle, she penned a heartfelt note for her team who were filming and shooting against all the odds in these challenging situations. The ‘Pink’ actress shared a picture from Rann of Kutch, where she is looking in the opposite direction while posing for the camera.

Jotting down a heart-touching post, Taapsee wrote “Not sure if I have the time and space to explain how this film actually happened. From the basic storyline I heard in Chennai 3 years back to actually complete its filming against all odds in these challenging times. This was one hell of a driven team effort!”

“I’m going to reserve the details for later coz I’m sure we have many more battles to fight till the release but what I can say is this is one team that’s gonna do it all with a smile and most effortlessly coz the captain of this ship @akvarious believes in working strictly in between chilling with bunch of friends on set, instead of the other way round,” she continued.

She further said, “Producers @pranjalnk @nehaanand21 @rsvpmovies who are relentless and don’t have the word ‘quitting’ in their dictionary. @nehapartimatiyanidop whose lens can transform any basic moment into whistle blowing big screen shot . Writers, cast, art, production design , so on n so forth the list is long. Baaki release ke time kahaaniya bataane mein mazaa ayega.”

“For now drawing the curtains on #RashmiRocket and moving onwards n upwards coz this Rocket has left us sky bound! #FilmWrap #RashmiRocket,” concluded Taapsee.

In the Akarsh Khurana directorial, she will be seen as a runner from the Rann of Kutch who faces struggles during her journey of becoming an athlete. Priyanshu Painyuli plays Taapsee’s husband in the sports drama.

New Delhi: Today is the 27th day of the farmers’ movement amid falling mercury and the threat of the …
0

Covid-stress may be hard to beat even with exercise