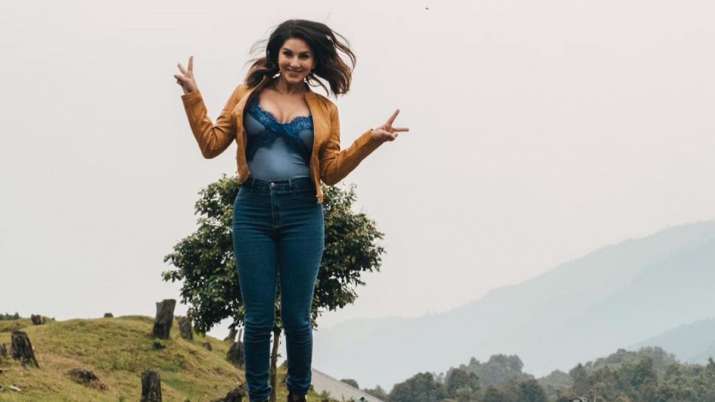 Bollywood diva Sunny Leone is an avid social media user. She loves to treat her fans with interesting and adorable pictures for herself and her family. The actress on Friday took to her Instagram handle and shared a carousel of pictures with a simple message of ‘spreading smiles.’ Sunny asked her followers to keep smiling and make the best of every situation. In the pictures, Sunny is standing on the stump of a tree, about to jump, and finally she jumped off the stump. “Make the best of every situation!!! Smile,” she wrote alongside the images.

Earlier, Sunny shared a string of sun-kissed pictures that capture her basking in golden glow. Rays of the sun fall on her skin adding radiance to her face. The actress can be seen in a denim short dress paired with a tan jacket. To complete her look, she wears sneakers and chunky sunglasses. For the caption, she simply wrote “Sun-kissed.”

Meanwhile, Sunny is currently in Kerala to shoot of her upcoming film, the psychological thriller “Shero”. She had recently shot for the reality TV show “MTV Splitsvilla” in the state, too. Talking about ‘Shero,’ it is directed by Sreejith Vijayan and will release in Tamil, Hindi, Telugu and Malayalam.

Also, the beautiful actress is all set to make her debut on the digital space with the fictional web show “Anamika”, which is billed as a ‘gun-fu’ action thriller and is directed by Vikram Bhatt.

Tia Bajpai shares her negative drug test report, says ‘get a drug test done and put it out in public’