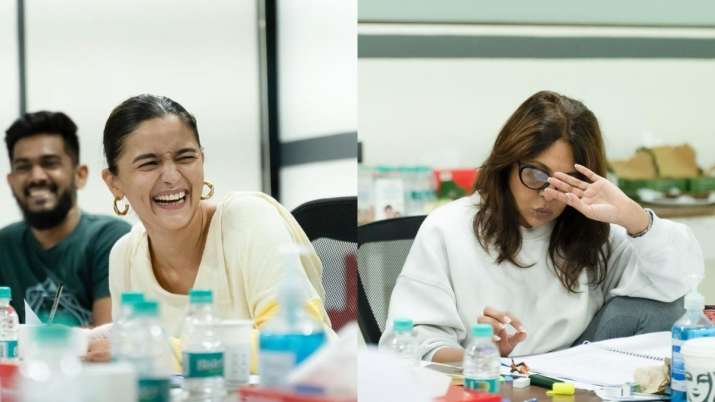 In one of the pictures, Alia was seen breaking into a fit of laughter while Shefali seems to be narrating an intense scene from the movie. Meanwhile, Vijay and Roshan were photographed in candid best.

Directed by writer Jasmeet K Reen, the film is set in Mumbai against the backdrop of a conservative lower middle-class neighbourhood.

Alia Bhatt had started the shoot of her maiden-production film on Saturday. Taking to her social media handles, Alia shared a bunch of pictures from her vanity van getting ready for the first day of the film. While Darlings! will be produced by Alia, the actress claimed that she will ‘first and forever be an actor’.

Alia’s post read, “day one of DARLINGS! my first film as a producer but I will always be an actor first & forever (in this case a very nervous actor) I don’t know what it is .. a night before I start a new film I get this nervous tingling energy all over my body.. i dream all night about messing up my lines..become jumpy.. reach set 15 mins before time fearing I’ll be late!”

She added, “I guess this feeling will never go away.. and it shouldn’t – because being nervous.. and feeling unsure means you really really care” She concluded the note by asking for luck from her fans. She said, “P.S – wish me luck pls (I’ll need all of it to match up to my co-actors).”

Alia shared the same post on Twitter and received a reaction from Shah Rukh. The actor retweeted her post and said, “After this production please sign me up for your next home production little one. I will come in time for the shoot and be very professional..promise!” Alia responded, “hahaha I could ask for nothing more.. done deal signed! Love you my favourite.”

Apart from Darlings, Alia also has the Telugu movie RRR and Ayan Mukerji’s Brahmastra in her kitty.

We love these merchandise, and we hope you do too. E! has affiliate relationships, so we might get …
0

No FIR in Sushant Singh Rajput’s case was lodged in Mumbai due to political pressure: Bihar to SC

Image Source : INSTAGRAM/FANPAGE No FIR in Sushant Singh Rajput’s case was lodged in Mumbai due to political …
0