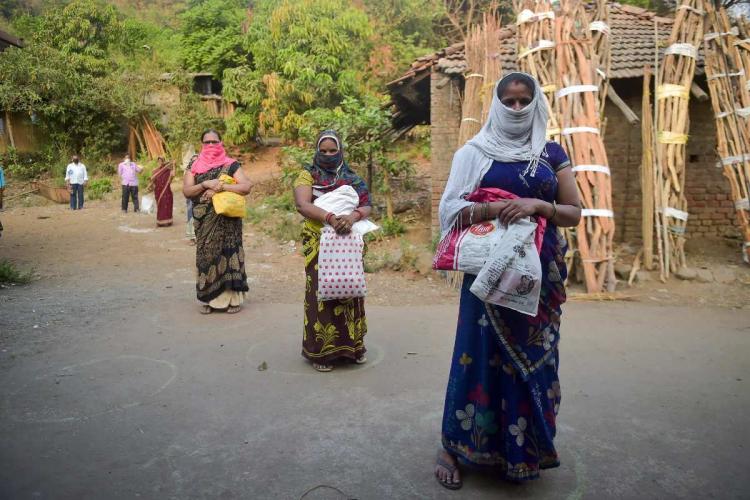 In continuation with the ongoing discussions on the Rural Realities around the country, the Centre for Habitat, Urban and Regional Studies (CHURS), IMPRI Impact and Policy Research Institute, New Delhi, organised a panel discussion on Rural Realities | Telangana & Andhra Pradesh | Practitioners’ Experiences in Tackling the Second Wave in Indian Villages on 14 May, 2021, as the second wave of coronavirus pandemic is engulfing the length and breadth of our country and hitting the heartland of our country which is the rural areas.

Epidemiology and Transmission Dynamics of COVID-19

The chair of the session, Prof. Prakash Babu, Professor, Dean, School of Medical Sciences, University of Hyderabad, Andhra Pradesh set the tone of the discussion by sharing his views that the COVID-19 pandemic had reached a stage of community spread in both rural and urban areas, breaking all barriers of gender and age, affecting a large population.

As per the report, there are more than 39.6 lakh people in rural areas infected with the COVID-19 pandemic in the second wave which is much more than the peak infection of the first wave in September 2020 resulting in rural places being affected equally in the second wave.

The issues which have widened the second wave crisis in rural areas are ignorance, malnutrition and deficiencies. Since the symptoms of the first wave and second wave have been very different and difficult to be attributed to COVID, diagnosing it has become a complicated issue in rural areas. Also in rural areas, people lack awareness of the disease and monitoring symptoms associated with it.

The younger population in rural areas is much more affected. The lack of vaccination facilities in rural areas is also a major concern. The majority of people below 45 years are asymptomatic resulting in the high spread of the pandemic. People in rural areas are losing their lives due to a lack of minimum basic facilities.

Dr Sridevi, moderating the session, indicated a major issue of lack of testing or hiding positive cases in Telangana as compared to Andhra Pradesh which conducted large-scale testing accompanied with more reliable data in terms of positive cases. Both the states failed in improving health infrastructure and health care facilities in terms of primary health care centres and availability of manpower and medicines.

Despite the pandemic, the expenditure of the government in health care was merely 3.3% in Telangana and 5 % in Andhra Pradesh.

Major issues related to the catastrophic rise of the second wave:

Malnutrition As A Threat Multiplier

Dr Sridevi also highlighted that the level of malnutrition in India is very high. As per the NFHS report, 14 states in India suffer from high levels of malnutrition where levels have gone alarmingly up for those below 5 years of age and 60% of women in their reproductive age suffer from moderate or acute anaemia. These malnutrition indices have a great impact on immunity levels and cognitive skills leading to the death rate.

Dr. Donthi Narasimha Reddy, Independent Consultant, Policy Expert and SDG Campaigner talking about pandemic said that people were dealing with perceptions more than actual statistics and there was a need for much more fragmentation to understand the reality.

Presenting ground realities of Andhra Pradesh and Telangana Dr Donthi highlighted that rural health infrastructure had been neglected in the last two decades and there was more emphasis on privatisation within public hospitals with diagnostic centres, sanitation services, etc. being privatised within public hospitals.

Talking about the history of diseases in Andhra Pradesh he stated that it had past infectious diseases like viral fevers, Japanese encephalitis, Chandipura Virus, Anthrax, HIV, Chikungunya and Malaria. He further pointed following factors of poor vector management, mainstream neglect and Andhra Pradesh’s incapability of responding to viral fevers as a complete chain and the vulnerability factor of malnutrition in rural areas as a major cause of the spread of infectious diseases in states since past.

Throwing light on the impact of COVID-19 on the livelihood of people he said that the pandemic had badly impacted the livelihoods of people doing small jobs due to lockdowns. Various handloom weavers in both states were affected severely.

The Importance Of Prioritising Mental Health During COVID-19

Dr Varudhini Kankipati, Co-founder, InnerConnect, concentrated her talk on mental health and said that there was a scenario of fear-driven mental health related to COVID in place, and secondly, the fear of the impact of the pandemic on family and individual.

She further said that once fear precipitates from community to neighbourhood then family and finally to individual, a consistent feeling of helplessness arises. This consistent feeling of helplessness results in anxiety leading to depression, OCD symptoms, or a sense of hopelessness. Prolonged anxiety leads to other forms of severe mental and physical health like loss of sleep, appetite.

She also underlines that media should also take responsibility in showing hope instead of only showing catastrophe and effects of a pandemic on everyone which has huge repercussions on individual and community level. She also underlines the pivotal role of women in understanding the mental health of the family.

Time To Understand Inequality Of Distribution

Dr P B N Gopal, Chief of Critical Care and Senior Consultant Intensivist, Continental Hospitals pointed that the Telugu states were set before division in 2014, the whole socio-political and medical region for almost half-century was centred in Hyderabad.

The medical infrastructural and educational systems were not evenly developed in Telugu states. The COVID pandemic struck in such a situation where the medical facilities are widely variable both in public and private sectors in both states.

Dr Gopal states that there is no transparency in what people are getting and whether medical facilities have reached the last mile or not. Starting vaccination drive in the inter-pandemic period and lack of preventive measure to tackle the spread of the second wave are major issues.

He further underlined that the second priority given in vaccination to elderly people was skewed and should have been given to migrant labourers. He dwelled upon that majority of the population in the second wave are younger, fitter and sicker, resulting in increased mortality.

Talking about medical facilities Dr Gopal stated that testing, vaccination and treatment are severely lacking in rural areas of both states. There exists a lack of central command in both states taking into account the availability of beds and proportion of health care workers, indicating a lack of data.

We need to follow triaging policy so that we can treat able men first, who can go out and serve society. On the other hand, we are thinking about the sickest first which has the highest mortality and expenditure and the least outcome. There also exists no regulation of oxygen supply proportionately to the highest number of attendees’ hospital. Government lacks data on the number of patients in corporate, private and public hospitals and statistics on the supply of oxygen from various non-government organizations.

Dr Gopal also highlights a major point that there exists non-pulmonary infections of various organs; lungs, brains, intestine and kidneys along with secondary infection. He further stated that the highest risk factor is obesity with obese and elderly people having high mortality in the first wave of the pandemic while the second wave of the pandemic has hit younger and sicker patients resulting in stagnant bed occupancy rates.

Throwing light on pandemic effects on rural livelihood Dr G V Ramanjaneyulu, Executive Director, Center for Sustainable Agriculture, Secunderabad, Telangana said that the situation was much worse with people facing difficulties in finding work. The health facilities in rural areas are poor with public health facilities collapsing significantly in both states. The pandemic brought new challenges to rural areas where people are divided by caste and parties creating serious problems.

Talking about the impact of the pandemic on health he said that it had a lot to do with mental strength as holding on to the desire to live in such a situation is most important. The misinformation and rumours associated with the pandemic have also created panic among people , and hence, information filtering is important to be carried out.

Mentioning about major conditions constituted in Telangana, she states that there exist three conditions:

Dr A Suneetha, Coordinator, Anveshi Research Centre for Women’s Studies stated that the non-acknowledgement of voluntary networks by the Telangana government has led to voluntary organizations relying on local authorities. While the government was okay with the distribution of rations in the COVID-19 situation the voluntary health networks were side-lined completely.

She also said that the suppression of data and information by the state cost the state badly as major allocations given by the central government based on data given by the state has fallen short in meeting the needs. PHC Level reporting shows a high positivity rate and mortality rate which has not been disclosed in data.

She further highlighted that media too had been suppressed by the government. There exists a kind of policy paralysis because of the image trap. There also exists a need for open isolation and quarantine centres as the disease is infectious and cannot be curbed by home isolation.

Responding to a question on the availability of vaccination at the last-mile, Prof Prakash Babu said that considering the existing disproportionality in production, supply and demand in vaccination it would not be available to all the population even in the coming 2 to 3 years and the only hope was the herd immunity attained by the people after community spread.

25 rescued, many feared trapped after building collapses in Maha

Chennai: The Bharat Bandh did not have too much of an effect in Tamil Nadu. State transport buses maintained …
0