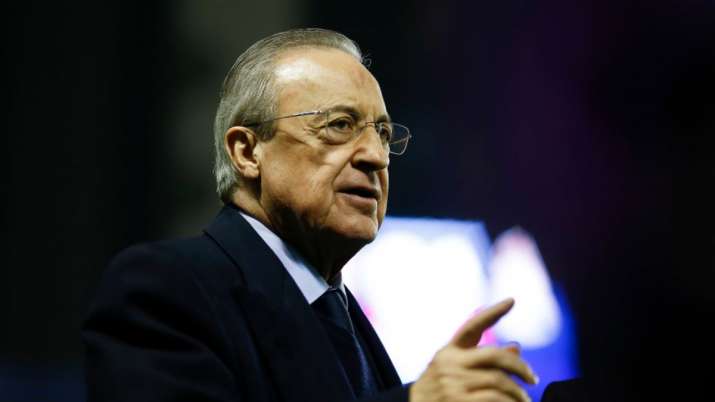 It’s been a rocky two months for Florentino Pérez.

The Super League scheme the Real Madrid president had engineered with hopes of revolutionizing European soccer blew up moments after takeoff.

Zinedine Zidane then said he was walking away, this time apparently for good, because the Madrid coach felt he had lost the support of his boss.

And now, Sergio Ramos, the flag bearer of one of the club’s most successful eras, is leaving even when he was willing to stay on the club’s terms.

All told, the future looks more than uncertain for Real Madrid — except for Pérez, solid as ever in his role as leader of the Spanish powerhouse.

Pérez, sharply dressed in suit and tie, gave no sign of wavering in his decision to let Ramos walk away as a free agent when they shared in his farewell event on Thursday. The only moment of awkwardness was when Ramos put his arm on Pérez’s shoulder for a photo and the president’s hands stayed at his sides.

He thanked “beloved Sergio” for his service after 22 titles in 16 seasons, calling him an “emblematic player” who Madrid’s fans “will always carry in their hearts.”

“Today is not an easy day because you have always been someone special for me and we have both fought for and shared in the successes of this club,” Pérez said.

Ramos insisted he felt gratitude toward Pérez, who signed him at age 19 from Sevilla. But Ramos also made it clear that he had wanted to stay at Madrid. The 35-year-old defender said that after initially asking for a two-year extension, he was eventually willing to accept the single year the club had offered. But when he told Madrid he was ready to sign the shorter deal, the club said it was no longer on the table.

“I was told a week ago by my agent and it surprised me,” Ramos said after the ceremony with Pérez. “At no point was I given an ultimatum and I understood that our negotiations were still ongoing. I thought that I could accept the offer, but it was too late.”

Madrid had already gone ahead and signed David Alaba on a five-year deal after the 28-year-old defender left Bayern Munich, apparently filling Ramos’ spot on the squad.

The center back, who was Madrid’s captain, is now on the hunt for a team.

Once again, when push came to shove, Pérez held firm. Just ask former goalkeeper Iker Casillas, who Pérez ushered out in 2015 despite the player once being seen as ¨Saint Iker” for his remarkable saves.

In April, things were looking pretty good for the 74-year-old Pérez, who has run Madrid for most of the last two decades. Unopposed, he won a sixth term as club president that will keep him in power until 2025.

Two weeks after his reelection, Madrid and 11 other elite European clubs announced the foundation of the Super League in a shock attempt to create a new competition that would replace UEFA’s Champions League. Pérez, the businessman who returned Madrid to the heights of soccer with his simple formula of investing big in star players, was set to become the Super League’s first chairman.

But the intense backlash by fans, players and coaches — and threats of retaliation by UEFA — made most of the clubs abandon the project, leaving Pérez’s Madrid alone with Barcelona and Juventus as the stubborn three still clinging to the scheme.

So instead of culminating his most audacious achievement, Pérez is now mired in a legal battle with UEFA and the best-case scenario for him in the short run appears to be avoiding harsh punishment for his club.

And more trouble began to brew from within his club.

Ramos’ departure came three weeks after Zidane renounced the last year on his contract following the team’s first season without a title in a decade.

It was a completely different farewell from when the French coach left the first time after guiding Madrid to three consecutive Champions League titles from 2016-18.

“Things are different now,” Zidane said after stepping down for a second time. “I’m leaving because I feel the club no longer gives me the confidence that I need, it does not offer me the support to build something in the medium or long term.”

Zidane did not say whether the stalled negotiations with Ramos contributed to his decision to leave, but Zidane has always stuck by Ramos and the core of veterans who won so much under his direction.

In the past, Pérez’s response to an unsuccessful season was to buy talent. That option has now been cut off by the economic hurt caused by the pandemic.

So it appears that Carlo Ancelotti, brought back to Madrid by Pérez as coach for a second stint, will have his hands full working with a squad that is in flux and in search of a new leader on the field.

New Delhi: Batting nice Sachin Tendulkar on Sunday paid tribute to ‘three people’ who in accordance to him, performed …
0

Image Source : TWITTER/CHENNAIIPL Suresh Raina has revealed that he and MS Dhoni “hugged and cried” after announcing …
0