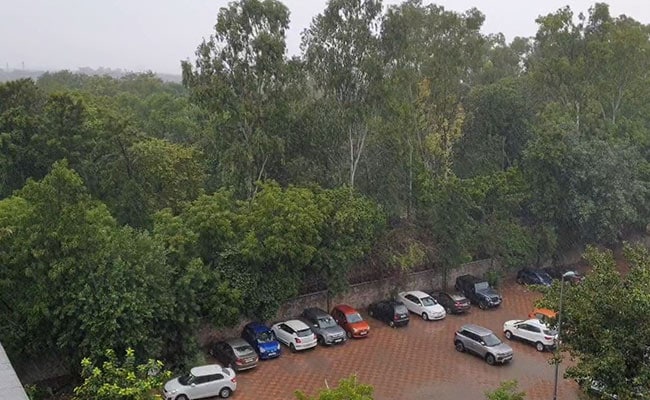 Reeling under scorching heatwave, Delhi got the much-needed respite this evening as light rains were witnessed in several parts of the national capital.

Daytime temperatures were above 40 degrees Celsius for the fourth consecutive day today, which have now dropped a few notches due to scattered rainfall in the city.

Earlier in the day, the India Meteorological Department (IMD) said “isolated and scattered thunderstorm activity accompanied with lightning and rainfall is also likely” in Delhi and nearby states but no favourable conditions are likely to develop for further advance of southwest monsoon as the heat wave continues.

“Hence, subdued rainfall activity is very likely to continue to prevail over Northwest, Central and Western parts of Peninsular India during next 5-6 days,” it said.

A severe heatwave has pushed the temperature to a nine-year high in Delhi as monsoon rains run behind schedule. Delhi saw 43.1 degrees Celsius on Thursday, the hottest July day in the city since 2012 when the capital sweltered under 43.5 degrees Celsius.

Temperatures have remained more than seven degrees Celsius above normal for this time of the year, prompting the IMD to classify it as “severe extreme heat”.

READ ALSO :  India, China Have A Three-Step Ladakh Cool-Off Plan But No Agreement To Implement It

The weather department said the mercury will stay above 40 degrees for the coming week because of the late arrival of the southwest monsoon and “loo” blowing in from Rajasthan and Pakistan. Forecasters predict that the annual rains will not hit New Delhi before July 7, making it the most delayed monsoon in the national capital since 2006.

The intense heat has also driven up power consumption in Delhi, which peaked to nearly 7,000 megawatts (MW) this week, 10 to 15 per cent higher than the average demand at this time of the year.

Rahul Gandhi has been repeatedly questioning the federal government on teh developments at Ladakh. New Delhi: Congress’s Rahul …
0

The nationwide service is awaiting readability from the Centre, on whether or not or not the lockdown deadline …
0

A quick response team visited the area and spoke to residents about precautions they must take. Pune: Maharashtra …
3