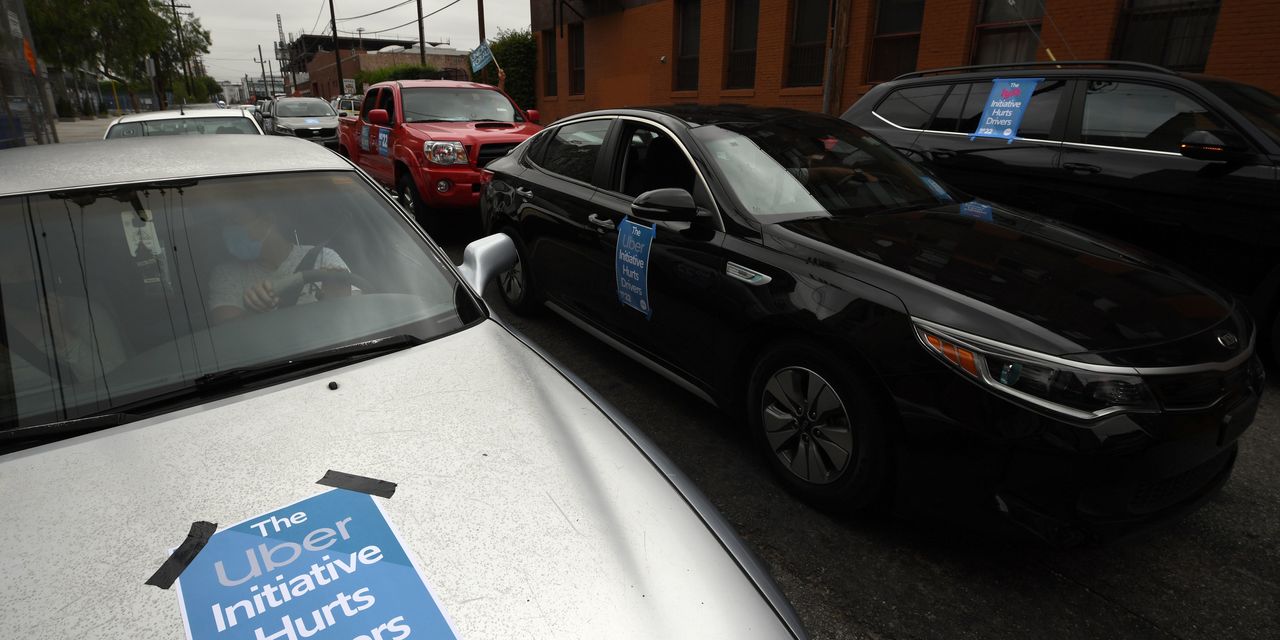 Ride-hailing drivers and supporters gathered in Oakland, Calif,. on Wednesday to denounce Uber Technologies Inc. for antiracism billboards it has put up in 13 major cities around the country, calling the company hypocritical as it fights a California ballot measure that would require it to classify drivers as employees.

To protest the billboards that read “If you tolerate racism, delete Uber,” the drivers and activists carried their own sign that read, “If you support racial justice, vote no on Prop 22.”

Organizers of the protest said the company’s billboard campaign is “disingenuous” because the company refuses to provide benefits to drivers, who are disproportionately immigrants and minorities. They cited at least one study, by the UC Santa Cruz Institute for Social Transformation and some advocacy group partners, that showed 78% of drivers in San Francisco are “people of color.” Another survey, by UnidosUS, found that 40% of Latinos around the nation had done some kind of gig work.

“These billboards are hypocritical and offensive, but the truth is Uber and Lyft have been exploiting drivers and violating our rights for years now,” said Mekela Edwards, an Uber driver and We Drive Progress member from Oakland, in a statement. “Prop. 22 was written to make rich CEOs richer and workers like me work twice as hard to get half as far.”

A housing activist who is running for Oakland City Council, Carroll Fife, said at the protest, “They are exploiting our labor for their wealth.”

Pointing at the billboard, she said, “this is insane.”

An Uber
UBER,
+2.01%
spokesman said the company had no comment.

Proposition 22, which will be on the ballot in November, seeks to exempt gig companies from having to comply with a California law that would require the companies to classify their drivers and delivery workers as employees instead of independent contractors. Instead, the measure would give drivers additional benefits that fall short of full employee benefits and protections. This week, the Los Angeles Times reported that the $181.4 million spent by Uber, Lyft Inc.
LYFT,
-0.76%,
DoorDash Inc. and Instacart so far makes the initiative the costliest in California history.

See: The different routes Uber and Lyft could take as they fight California law

Uber rolled out its billboard campaign Aug. 28, the 57th anniversary of the March on Washington and Martin Luther King Jr.’s famous “I Have a Dream” speech. At the same time, the company pledged $10 million to support Black-owned businesses in the next two years, extending zero delivery fees for Black-owned restaurants through 2020 and other antiracism and equity commitments.

Here’s why London will be in COVID lockdown from Wednesday, one week after the first vaccine rollout

The U.K. capital will move to the country’s tightest COVID-19 restriction regime on Wednesday, after a few weeks …
0

U.S. stocks have risen to all-time highs this year. Should you ‘sell in May and go away’?

Stocks have been on a tear this year, leaving investors to question whether to “sell in May and …
2

Telecom is an essential service and subsequently, there’s a better duty on connectivity suppliers to do what it …
1