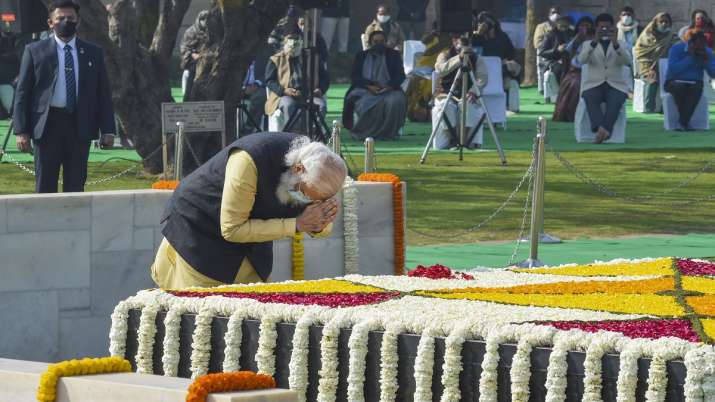 The nation on Saturday remembered Mahatma Gandhi on his 73rd death anniversary with President Ram Nath Kovind, Vice President M Venkaiah Naidu and Prime Minister Narendra Modi leading the country in paying homage to the Father of the Nation.

Gandhi was shot dead on this day in 1948 by Nathuram Godse. His death anniversary is observed as Martyrs’ Day.

Paying tributes to Mahatma Gandhi, Kovind said people should adhere to his ideals of peace, non-violence, simplicity, purity of means, and humility.

“On behalf of a grateful nation, my humble tributes to the Father of the Nation, Mahatma Gandhi who embraced martyrdom this day. We should adhere to his ideals of peace, non-violence, simplicity, purity of means and humility. Let us resolve to follow his path of truth and love,” he tweeted.

On Twitter, Naidu shared a quote of Mahatma Gandhi – “Ahimsa is the highest duty. Even if we cannot practice it in full, we must try to understand its spirit and refrain as far as is humanly possible from violence.”

“Gandhiji was a crusader of peace, non-violence & selfless service. Both, through his words and actions, he left an indelible imprint on the sands of time. He inspired countless people worldwide to follow the path of ahimsa,” Naidu said.

“Mahatma Gandhi worked relentlessly for the uplift of the vulnerable sections, downtrodden and socially backward. Gandhiji’s glorious life and principles continue to inspire the entire world. As we remember him, let us emulate his teachings and resolve to follow the path shown by him,” he said in another tweet.

“Tributes to the great Bapu on his Punya Tithi. His ideals continue to motivate millions. On Martyrs’ Day we recall the heroic sacrifices of all those great women and men who devoted themselves towards India’s freedom and the well-being of every Indian,” he said in a tweet.

Delhi Chief Minister Arvind Kejriwal also paid tributes to Mahatma Gandhi, saying his principles of truth and non-violence are still relevant through which any struggle for rights can be won.

“Truth, non-violence, patience, bravery and ‘Satyagrah’. These principles of Gandhiji that rendered ineffective bigger powers are relevant even today, through which any struggle for rights can be won,” he tweeted in Hindi.

In his tribute to Mahatma Gandhi on Twitter, Congress leader Rahul Gandhi shared a quote of the Father of the Nation – “Truth stands, even if there be no public support. It is self-sustained”.

Rahul Gandhi also visited the Gandhi Smriti to pay his respects to the Father of the Nation on his death anniversary.

Congress general secretary Priyanka Gandhi Vadra paid homage to Mahatma Gandhi, remembering that he had said the “ruler who defies public opinion is cruel and any unjust law is a form of violence in itself”.

“Gandhiji was killed with the purpose of killing his ideas. But Gandhiji’s ‘Satyagraha’ is the strength of the whole country and it is our responsibility,” she tweeted in Hindi.

CPI(M) general secretary Sitaram Yechury said, “We must never forget the forces that assassinated the Father or the Nation – Mahatma Gandhi. The ideology of hate and fratricide that killed him will never be allowed to succeed.”

“Its inheritors will be fought and pushed back,” he said.

Malabar Exercise: Amid tension with China, India’s naval drill with US, Japan and Australia from Tuesday

Image Source : REPRESENTATIONAL IMAGE The Indian Navy will deploy a number of key platforms in the exercise …
0

Kolkata: Union Home Minister Amit Shah has given a big shock to the ruling Trinamool Congress (TMC) on …
0

New Delhi: The nationwide tally of confirmed COVID-19 cases rose by a single-day file of over 6,000 on …
0