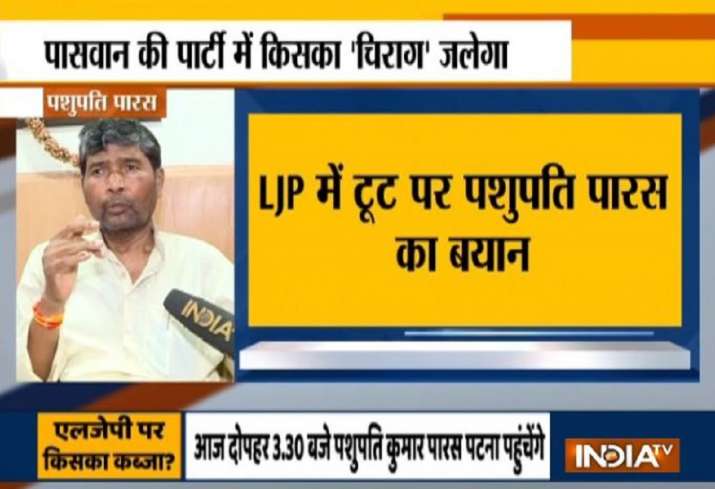 Chirag Paswan’s uncle Pashupati Kumar Paras on Wednesday said five MPs of the Lok Janshakti Party Tuesday put forth their papers and concerns against Paswan. Speaking to India TV, Pashupati Kumar said, “some anti-social elements did not let the LJP form an alliance with the NDA in the past, this led to pick and chose.”

“There is no democracy in the party and is only running on dictatorship,” Chirag Paswan’s uncle Pashupati Kumar Paras alleged.

Speaking on allegations of not lending a helping hand to the family following the demise of Ram Vilas Paswan, Pashupati Kumar said he helped the family on financial grounds.

On Ram Vilas Paswan’s hospitalisation, Pashupati Kumar Paras said, “I was admitted to AIIMS after testing positive for COVID-19, and that is when I came to know of my elder brother’s illness.”

“I then requested my doctor to discharge me from the hospital, so that I can visit my elder brother Ram Vilas Paswan,” he further said.

On allegations of creating splits within the party, Pashupati Kumar Paras said, “I have rather saved the party and will continue to do so. I will fulfill the dreams of my elder brother.”

The Lok Janshakti Party faction headed by Chirag Paswan on Tuesday expelled the five MPs of the party who had rebelled against him, while the group led by his uncle Pashupati Kumar Paras removed him from the post of the party president. Both factions moved swiftly to take control of the party a day after Paras, the youngest brother of Paswan’s father and party founder Ram Vilas Paswan, was recognised by the Lok Sabha secretariat as the leader of the Lok Janshakti Party (LJP) in the House.

READ ALSO :  After taking charge as Cabinet minister, Paras has this to say about nephew Chirag Paswan

While Chirag Paswan has been isolated in the parliamentary party as all other MPs beside him have backed Paras, sources said he continues to draw support from other leaders in the organisation.

The matter is now likely to reach the Election Commission as both factions have claimed to represent the party.

NEW DELHI: India on Saturday noticed one other report spike of 14,516 new COVID-19 cases in a single-day, …
0
Politics

Unorganised sector workers may get IDs

NEW DELHI: The authorities has pulled out a 2014 proposal to supply identification numbers to workers from the …
0
Politics

Drone cameras were deployed in Chamoli district. The deployment was done to monitor the increasing water level of …
0