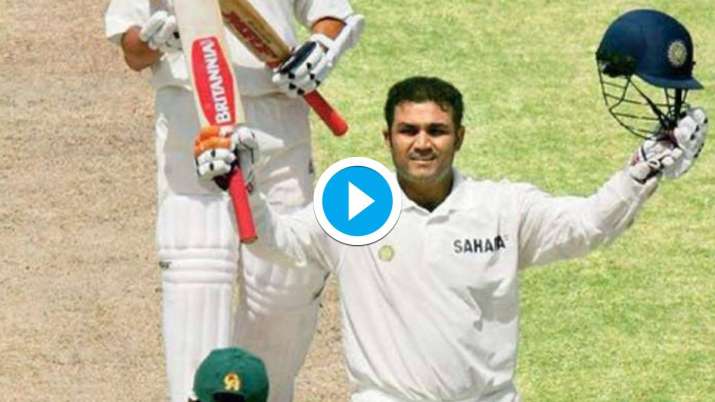 On this day back in 2004, Virender Sehwag became the first Indian to score a triple Test century, blasting 309 runs in Multan, Pakistan. Sehwag was a destructive batsman and has left his mark wherever he set foot and the former Team India opener was not shy of facing the deadliest of bowlers during his time.

It was 17 years from today i.e March 29 when India toured Pakistan. The intensity between the two rivals was already profound and it was the opener Sehwag who planned on making it big.

Sehwag also took to Twitter to recall the memorable day, reminding fans that four years later on the same day he scored 319 runs against South Africa.

Despite facing an attacking unit comprised of Shoaib Akhtar, Mohammad Sami and Abdul Razzaq, Sehwag stood tall in Multan as he hammered the hosts away. Sehwag’s historic innings came to an end after he was caught out by Taufeeq Umar on Sami’s delivery.


However, the bashing did not stop after Sehwag’s departure. Master Blaster Sachin Tendulkar was on a roll as he added his 194*and fell six runs short of his double ton. Tendulkar troubled the bowlers with his classy innings as he hammered 21 fours in the 348 balls he faced.

India went on to post a mammoth total of 675/5 and declared. They defeated Pakitan by an innings and 52 runs as the hosts made 407 & 216. Despite Mohammud Yousuf’s ton, India knew they had the match in their hands after Sehwag’s heroics.

Sehwag’s legendary triple ton is not only historic but also a bar for the upcoming batsman in the future as the destructive and explosive batsman scripted a different chapter in the history of Indian cricket.

Apart from the ‘Fab Four’ who comprised of Tendulkar, Sourav Ganguly, VVS Laxman and Rahul Dravid, the Sultan established a different league of his own as he was recognised as a match-winner with his smashing knocks and will always go down as the player who changed the course of batting in Test cricket. Playing with the red ball has seen the greats play defensively, but bowlers knew, that whenever Sehwag comes on to bat, the outcome of the match will change.

Image Source : IPLT20.COM Australia’s international players are likely to get a two-three week window to feature in …
0