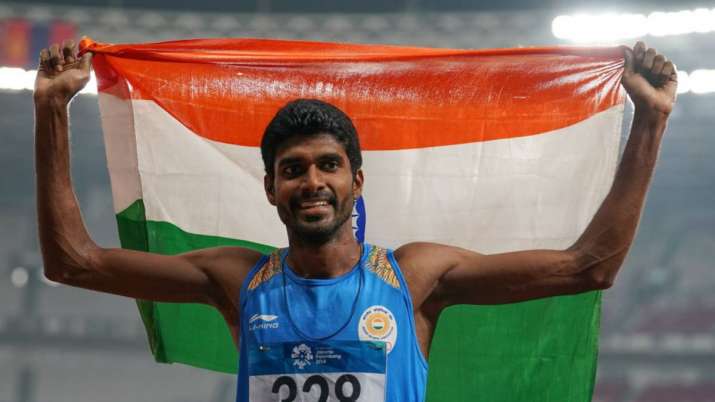 Jakarta 2018 Asian Games 1500 metres champion Jinson Johnson is on the road to recovery from injured Achilles tendon, and hopes to regain his competitive fitness by June and qualify for the upcoming Olympic Games.

In November 2019, the middle-distance runner from Kerala injured his Achilles tendon during a training session in Colorado Springs, USA. It took a long time for him to recover. He even skipped the Federation Cup, held this month in Patiala due to lack of full fitness.

Things are improving now, though. “I’ve started training hard and that gives me confidence that I will be successful in the next two months. By June, I should be fit to win an Olympic berth during the Inter-State Athletics Championships in Bengaluru,” Johnson told IANS.

The 2018 season was a high point of the Army runner’s career. At Gold Coast Commonwealth Games in April that year he broke a two-decade old national 1500m record by finishing fifth with a time of 3 minutes 37.86 seconds. The previous record was 3 minutes 38 seconds in the name of Bahadur Prasad.

After his brilliant run in the 2018 season, Johnson was expected to carry on his good form into the next year and in the Olympic year, 2020. But in March last year the Olympic Games were rescheduled to 2021 due to Covid-19.

But, for Johnson, the 2019 season was not as fruitful and things started turning sour in the later part of the year as he was side-lined with the Achilles tendon injury.

The Asian Games champion, though, came tantalisingly close to earning a Tokyo Olympics berth during European circuit in June 2019 by clocking 3 minutes 35.24 seconds – his personal best. But after that his form dipped and he sustained the injury.

“It was a bad phase of my running career. But I’m happy to be back to good old running days. I started with moderate training in January that was the reason I skipped the Indian Grand Prix competitions. My aim is to avoid burnout and gradually regain my fitness,” Johnson said.

With the Athletics Federation of India (AFI) having ruled out an international exposure tour to middle distance runners in the near future due to average performances in this month’s Federation Cup in Patiala, athletes like Jonhson would have to rely on domestic meets to achieve the Olympic qualification.

“Hopefully, I should crack the Tokyo Olympic qualification time in June. It will be one last chance for me,” he said.

New Delhi: The farmers’ protest has been going for more than two months against the agricultural laws made …
1

Who’s subsequent? As golf equipment begin to defer wages after prime stars dug their heels in over pay …
1