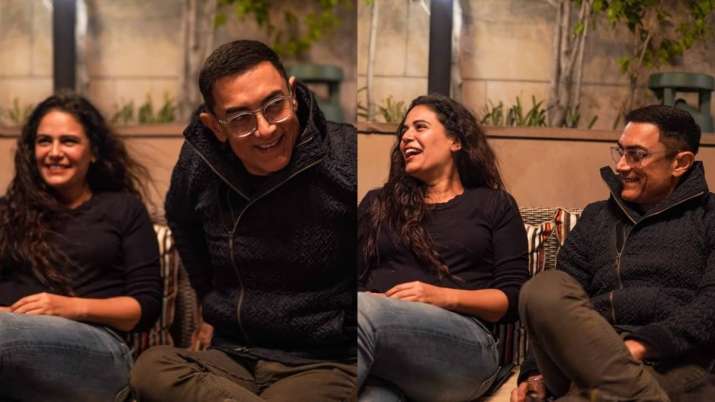 Mona Singh will share screen space with Aamir Khan for the second time in “Laal Singh Chaddha”. The actress had earlier featured alongside the superstar in the 2009 blockbuster “3 Idiots”. She called him a “great guy” to work with, adding that he is “the biggest prankster” she has ever met. “My first film with Aamir sir was ‘3 Idiots’. I still remember how nervous I was to shoot with him. Especially the baby delivery sequence. I was the only female in the room full of men while shooting that sequence of giving birth to the baby,” Mona said.

She added: “Aamir sir calmed me by narrating his experience of how his wife was screaming in pain when she was having her baby. So, he asked me to do whatever I feel like. I was extremely nervous to even hold his hand during the shoot.”

Recalling her first reaction on meeting Aamir , Mona said: “Raj sir (director Rajkumar Hirani) introduced me to Aamir sir while they were shooting for the song ‘All izz well’. Before doing my first sequence with him, Aamir sir told me that he had watched me perform in ‘Jassi Jaissi Koi Nahi’, and that made me feel at ease. I realised he is very down to earth and makes it comfortable for everyone around him.”

“When he is shooting, there is always ‘mazak masti’ happening on the set. He also believes in taking care of everyone and personally makes sure that everyone around him is happy. Especially the outdoor shoots with him are always exciting. While shooting for ‘Lal Singh Chaddha’, I had met with a severe foot injury,” Mona recalled, adding that Aamir and his wife Kiran Rao made sure she was taken to the hospital.

“I usually love spending most of my time with him during shoots. He never makes one feel that he is star around you. This year we all will be celebrating his birthday together,” said Mona.

“Another exciting thing about him is that he is a great foodie, but one has to maintain a rigorous diet due to our profession. He enjoys playing the Catan board game and insists all of us to learn it, too. So, during our recent outdoor shoot at Panchgani, he made us all learn and play the game,” she added.