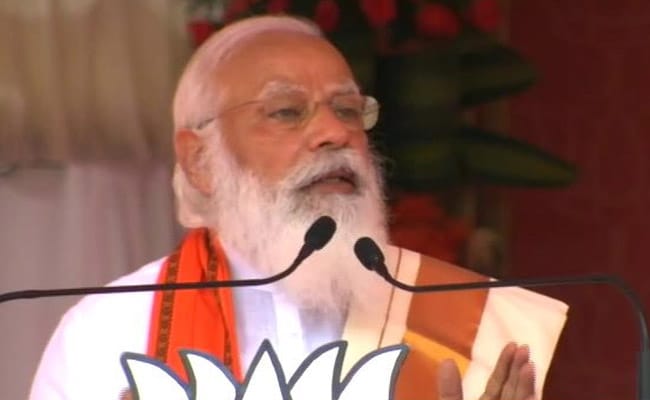 Prime Minister Narendra Modi, campaigning in Kerala today for “Metro Man” E Sreedharan, called the ruling Left Democratic Front (LDF) and the opposition Congress-led UDF “only different in name” and said their “match-fixing” was the “worst kept secret” of Kerala politics. He also accused the LDF of “betraying Kerala for a few pieces of gold” like Judas.

“For many years, the worst-kept secret of Kerala politics was the friendly agreement of UDF and LDF. Now, the first-time voter of Kerala is asking – what is this match-fixing? Five years one loots, five years the other loots,” said PM Modi, addressing an election rally in Palakkad.

“Both have their marked areas for making money. UDF has not even spared the rays of the sun.”

In Palakkad, the BJP has fielded E Sreedharan, the man behind the Delhi Metro and many other prestigious projects across the country. The 88-year-old was also pitched by BJP leaders in Kerala as possible Chief Ministerial candidate, though it is not official.

“‘Metroman’ Sreedharan Ji, a man who has done excellent work to make India modern and improve connectivity, a man admired by all sections of society, has devoted himself to Kerala’s progress. As a true son of Kerala, he thought beyond power, stood firm on his commitment to Kerala,” the PM said on the renowned technocrat, by his side.

Mr Sreedharan is the BJP’s biggest face in Kerala; the party has so far been a minor player in the coastal state, with the poll results oscillating between the Left-led front and the Congress-led coalition.

In a sharp attack on the LDF, the Prime Minister, referred to the gold smuggling scandal in which Chief Minister Pinarayi Vijayan’s office has faced allegations. “Judas had betrayed Lord Christ for a few pieces of silver… just like that LDF has betrayed Kerala for a few pieces of gold,” PM Modi said.

The youth of Kerala and professional communities, he said, were openly supporting the BJP because of its “forward-looking and aspirational” vision.

“Across India this trend is being seen,” said PM Modi.

He coined the acronym “FAST” for the Kerala polls. “F for fisheries and fertilisers, A for agriculture and Ayurveda, S for skill development and social justice and T for tourism and technology.”

Kerala will vote on April 6 for a new government. The results will be declared on May 2.

Centre says it has been supporting states and union territories by providing them vaccines free of cost. New …
2

Florida, US: Police said the truck’s driver was a participant in the Pride Parade. (Representational) Washington: One man …
4

Names of two channels surfaced for allegedly being involved in fixing the TRP. (Representational) Mumbai: The names of …
1

Sharmila Tagore To Sara Ali Khan: Count The Pataudis In This Throwback Gem