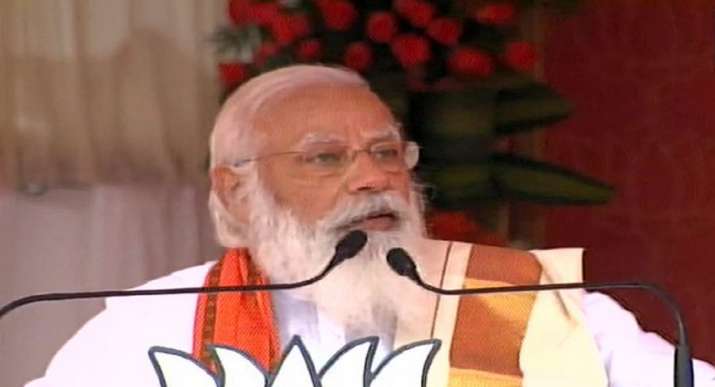 Describing the ruling Left Democratic Front (LDF) and the opposition Congress-led UDF as two sides of the same coin, Prime Minister Narendra Modi on Monday hit out at the Pinarayi Vijayan government in Kerala.

PM Modi, who addressed a rally in Palakkad while campaigning for BJP candidate ‘Metro Man’ E Sreedharan, said that people of Kerala are aware of the ‘match-fixing’ between the LDF and UDF.

“For many years, the worst kept secret of Kerala politics was the friendly agreement of UDF and LDF. Now, the first time voter of Kerala is asking — what is this match fixing? People are seeing how UDF and LDF misled them,” PM Modi said.

Referring to the gold smuggling scandal, PM Modi launched a sharp attack on CM Pinarayi Vijayan, saying the government has betrayed the state for some pieces of gold.

Hailing Sreedharan for his contribution  towards improving connectivity in the country, PM Modi said Kerala is awaiting ‘FAST’ development.

“The time has come for FAST development in Kerala- F for fisheries and fertilisers, A for agriculture and Ayurveda, S for skill development and social justice and T for tourism and technology,” the prime minister said.

The BJP, buoyed by its success in Palakkad in the recent civic polls, has fielded the 88-year old Sreedharan to fight it out with the 38-year-old Congress MLA Shafi Parambil, seeking a hat-trick of terms.

New Covid strain not yet found in India: Experts

Image Source : PTI A police person issues a challan to a commuter for not wearing mask in …
2