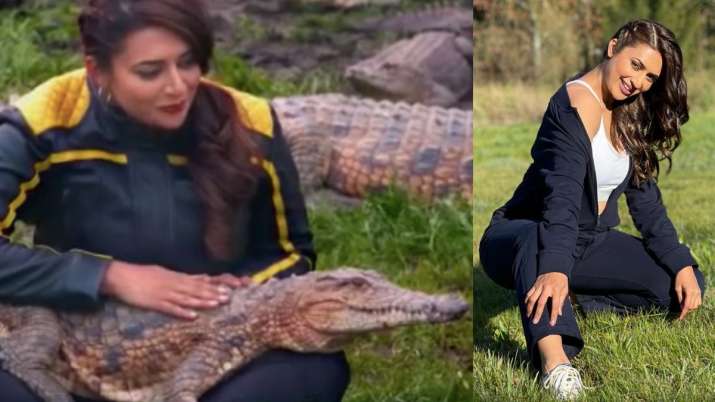 The adventure-based reality show Khatron Ke Khiladi season 11 has been making headlines ever since its announcement and fans are eagerly waiting for the 11th season of the reality show. The stunt-based reality show will soon premiere on Colors TV. Currently, the shooting of the show is underway in Capetown. Piquing the excitement of fans, the makers of the show, released a new promo. In a recent promo of Khatron Ke Khiladi, Divyanka Tripathi can be seen petting a crocodile as if she was singing a lullaby to a baby.

The video starts with the actress twirling in a maroon saree posing at the beach and the next scene shows Rohit Shetty introducing her saying “Divyanka bani magar rani”. And the next scene shows the actress singing a lullaby to a crocodile who is sitting on her lap. In the video, it can also be seen that Shweta Tiwari is frightened by the sight of Divyaka Tripathi singing to the crocodile.

Meanwhile, Divyanka’s co-contestants in the Rohit Shetty-anchored game show such as Shweta Tiwari, Arjun Bijlani, Abhinav Shukla, Divyanka Tripathi, Nikki Tamboli, Anushka Sen, Rahul Vaidya and others will be seen competing with each other.

Just a while back, Divyanka was missing her husband, actor Vivek Dahiya. She had shared a few photos with Vivek and had captioned the post, “Aaj phir tum pe pyaar aaya hai. Behadd aur Beshumaar aaya hai! #DancingToLoveTunes (sic).”

Also read: Kartik Aaryan all set for ‘Alag sa action’ as he marks his debut in the Brawl Universe; watch video

Amid the outbreak of COVID-19 in India, Delhi Crime actress Shefali Shah wore a plastic bag over her …
0