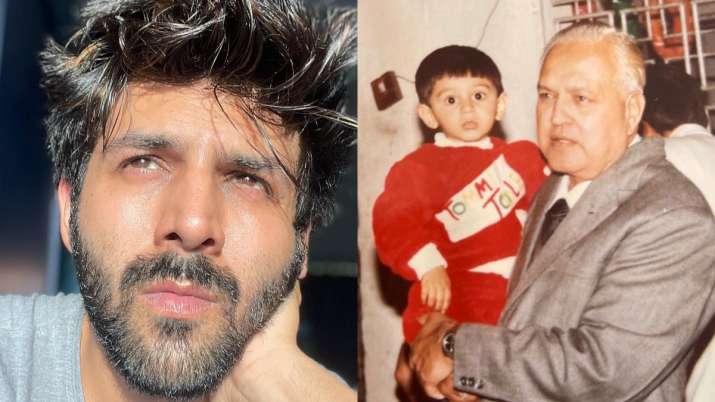 Actor Kartik Aaryan’s maternal grandfather passed away on Sunday. Paying homage to his grandfather, the actor took to his Instagram handle and shared a childhood pic of himself being cradled by his ‘Naanu’. The photo was accompanied by a little note which read, “Hope I get your swag some day. RIP Naanu”.

In the picture, Kartik was seen dressed in a cute red outfit, while his grandfather held him with all the love and warmth. The picture shows a close bond between Kartik and his ‘naanu’.

Minutes after the ‘Pati Patni Aur Woh’ actor shared the news, fans and well-wishers extended condolences to him and his family. Several Bollywood celebrities like Bhumi Pednekar and Nimrat Kaur sent in prayers too. Pednekar dropped a folded hand emoji on the post. “May his soul rest in peace. Take care,” a social media user commented.

Enjoying a wide and phenomenal fanbase, the young superstar has emerged as one of the most loved and popular stars of Bollywood with an interesting line up of projects, making him one of the busiest and most bankable actors in the country.

Looking forward to his upcoming thriller ‘Dhamaka’, Kartik Aaryan has piqued the interests of the audience with the teaser, showing glimpses of his intense and gritty character from the film. Venturing into horror comedy with Bhool Bhulaiyaa 2, Kartik Aaryan explores a new facade of his talent.

Recently announcing his collaboration with Sajid Nadiadwala and Sameer Vidwans for a grand musical love story, Kartik created a havoc with excitement on social media.

He’s rumoured be to be the lead in Ala Vaikunthapuramuloo remake and also star in Hansal Mehta’s next where he plays an Air Force pilot. With several unannounced projects and long list of brands to his credit, Kartik Aaryan is ruling the masses with his talent.