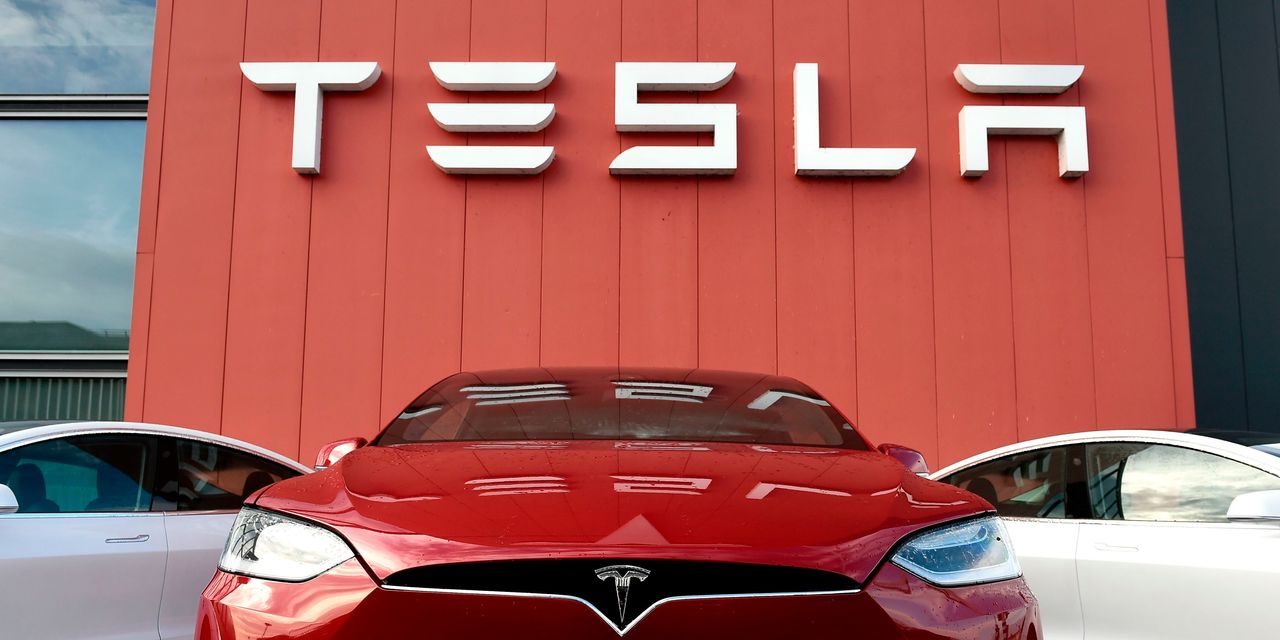 But what about a company that is probably great with a share price that is magnificent? Well, that’s Tesla
TSLA,
+4.35%.

Investors are polarized on this one.  Lovers or haters.  $TSLA or $TSLAQ.  The supporters and detractors are similarly
fervent in their views.  There is little
nuance.

I have been impressed by the company — but thoroughly stupefied by the performance of its shares. Using the most recently disclosed fully diluted share count of 1.21 billion shares, and based on an $800 share price, the company has a market cap that is just $35 billion shy of $1 trillion.

I admittedly have a natural value bias, but
I want to try to rewire my circuits and envision an optimistic scenario that
results in upside for Tesla’s share price.

So I’ve gone out to 2035, a year where it should be obvious to even the bears that production of internal-combustion-engine vehicles will be niche, if not forbidden.  I see 135 million cars and light trucks produced worldwide that year and assume that 90% of them will be fully electric. Those arguing for an autonomous, ride-sharing future will have to revise this figure down.

In 2019, Tesla produced 365,000 units. In that same year VW and Toyota each produced nearly 11 million. In the scenario painted here, Tesla would produce over twice that amount (22 million vehicles) in 2035.

And despite Tesla becoming a mass market
producer, I model a virtue-signaling price premium of 12% over the industry,
getting us to an average selling price of $50,000. This would result in Tesla revenues
of nearly $1.2 trillion dollars.

Toyota today does 7% net margins.  VW does 5%.
For this bullish Tesla scenario, I will liberally assume 9% net margins.
This means nearly $110 billion of net profit.

Meanwhile despite the princely stock-based compensation plans and aggressive capital raising required to finance this kind of expansion, I am modelling only 2.5% annual growth in diluted shares. On the 1.75 billion in shares I expect in 2035 this all works out to over $60 in earnigs per share.

I will also assume that despite it already being huge, Mr. Market will still pay a P/E of 20 for this mass market automaker. That gets me to fair value in this historically unparalleled scenario of $1,230 per share. This is much higher than where it is today.

If I assume that between now and then,
Mr. Market only expects to make just 10% a year on his Tesla investment that
gets us to share price today of about $295.

Now of course when you own Tesla, you also own optionality in Elon Musk, and what he and his hordes of rocket scientists are going to do next. It’s the “this is not just an automaker” argument. Well, that may be – yet rational shareholders should at least consider that if they are paying nearly $300 a share for an optimistic scenario for Tesla automobiles, they are also paying $500 a share (over $600 billion) for that Musk option.

Read: Here’s what Elon Musk has to say about becoming the richest person in the world

But back to the auto business, a key
driver is expected net margins. Metal-bashing is impacted by old economy things
like commodity prices and raw material costs (those will affect cost of battery
production too), and there will be some scale on market share (although not
remotely like that in pure technology industries).

Norway, the testbed for the future of EV, is shooting for zero-emissions by 2026, and is already up to over 50% share for sales of fully electric vehicles. The No. 1 seller? Not a Tesla.  It’s the Audi e-Tron.

VW-owned Audi sold 20% more of these e-Trons in Norway in 2020 than Tesla sold Model 3s. The VW ID.3 basically sold as well as the Model 3. In fact, of the total battery electric vehicle market in Norway, the Tesla Model 3 has just a 10% share.

The Model Y launch should improve their share in 2021, but there are a host of competing products launching soon as well. It is possible that a lot of Tesla investors do not realize the competitive dynamics, whether in Norway, or globally.

Meanwhile, Volkswagen would like nothing more than to destroy demand for Teslas, country by country. In this quest, VW will spend $20 billion on capex  annually, over four times what Tesla spends.  And Volkswagen is not alone.

GOOGL,
+0.07%
emulated with Android) took nearly all the share and thus put Nokia and Blackberry’s handset divisions out of business. This thinking goes that as software becomes more important in the auto sector that VW, Toyota, and their ilk will get “Appled” by Tesla.

Well, firstly, Apple has a 28% market
share with iOS.  That isn’t 100%.  More importantly, mobile phones have evolved
to having zero differentiation in hardware. Cars and light trucks will not.
People want variety. Some people want inexpensive and efficient, and don’t mind
ugly; some others want flamboyant, fast, and beautiful. Most of us are in
between.

In the U.S. alone there are over 250 car models sold each year, and many often have multiple trims that double the cost of the model. Tesla is not going to produce 250 models of vehicles to suit all tastes and wallets.

Just 14 months ago, the outlook for
Tesla (the company) was tremendous. The shares were trading at a split-adjusted
$48 a share, reflecting Mr. Market’s confidence in Elon Musk.  The consensus investor had high optimism that
Tesla would dominate the production of electronic vehicles in our clean future,
and believed that other manufacturers potentially might end up standardizing on
Tesla software architecture.

And nothing about this story has deteriorated. This is what the bulls still believe. In other words, that bullish 2035 outlook hasn’t really improved much for Tesla since late 2019. But in those 14 months, Tesla shares have exploded by over 1500%. It’s been a 16-bagger in 14 months. They have doubled, doubled again, and doubled yet again.

With that, I would strongly encourage holders to consider this framework above.  Even if a lot of things go very right, it is extremely difficult to believe that the stock’s future will look like its recent past. In my view, a great many things have to go perfectly well – many of them outside of Tesla’s control – for this not to end horribly.

And: 20 electric vehicle stocks besides Tesla and Nio that analysts expect to rise the most over the next year

Andrew Dickson is the chief investment officer of Albert Bridge Capital , a London-based manager of concentrated equity portfolios for institutional investors. Follow him on Twitter @albertbridgecap.

More from Andrew Dickson: Here’s why there’s such a thing as too many investor meetings with the CEO

Opinion: This is the big risk if Biden copies Trump and uses an obscure rule to…

‘Want to be kingmaker’: More headache for Mamata as…

Nokia 1.4 Specs Leaked: Everything to know about the upcoming Nokia…

Prev Next 1 of 4,808
You cannot print contents of this website.
Go to mobile version