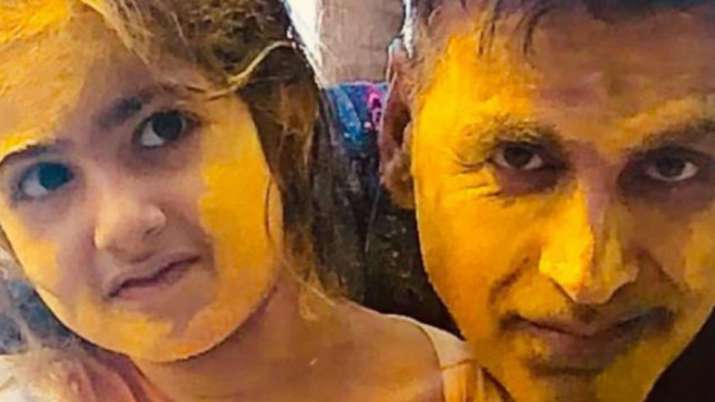 Star couple Akshay Kumar and Twinkle Khanna shared glimpses of their at-home Holi celebration with their daughter, Nitara. Akshay Kumar on Monday posted a cute picture with his daughter.  The actor and his six-year-old daughter have faces covered in ‘gulaal’ in the image. “No bigger joy than festivities with those who are a part of you #HoliHappiness #StaySafe #FamilyFun,” Akshay captioned the picture.

On the other hand, actor-turned-author Twinkle shared a glimpse into their Holi celebration, which was a simple game of tic-tac-toe, but on the grass. She used flowers and stones for the celebrations. In the clip shared by Twinkle on Instagram, Nitara could be heard saying ‘spectacular’. The game ends in a draw but Nitara concludes the video saying, “I win, you lose.”

“Celebrating Holi with the simple games of our childhood. The moves may or may not be ‘spectacular’, but in time to come I have a feeling this will one will be a spectacular moment hanging up on the museum walls of our memories. #spectacularmorning #HappyHoli,” Twinkle captioned the video.

Earlier in the day, Akshay had posted a cautionary tweet to fans planning to play Holi amid the ongoing pandemic, requesting them to maintain Covid protocol and not compromise on their safety. Akshay posted a line from his song “Do me a favour let’s play Holi” from his 2005 release “Waqt: Race Against Time” to make his point.

“Do me a favour let’s not play Holi! Celebrate at home, for your safety and the safety of your loved ones. Wishing you all a very Happy Holi,” he wrote.

Akshay has a busy season ahead with multiple releases lined up. He recently finished shooting for his film Atrangi Re, helmed by filmmaker Aanand L Rai, film also features Sara Ali Khan, Dhanush, and Nimrat Kaur. The film is written by Himanshu Sharma and the music is by Academy Award-winning composer AR Rahman. The project is a joint production of Colour Yellow Productions, T-Series and Kumar’s Cape Of Good Films. Atrangi Re is slated to release on 6th August 2021.

Aparth from this, scheduled for release over the next months are “Sooryavanshi”, “Bell Bottom” and “Prithviraj”, while “Bachchan Pandey” and “Ram Setu” are in various stages of production, too.

Payal Ghosh: Mr Kashyap has lied before the police

Ameesha Patel sets the internet on fire with these pics amid coronavirus lockdown, watch