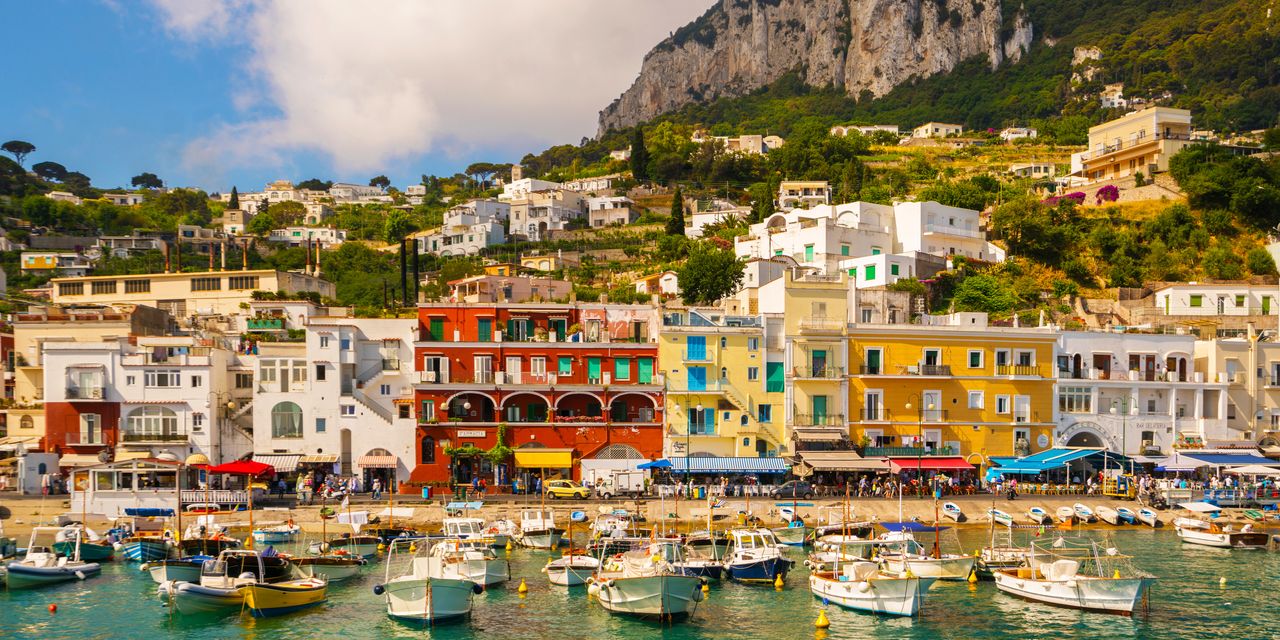 The beauty, attractions, and history of Italy are all so alluring that visitors quickly get seduced and start dreaming of living here. What many don’t realize on those initial travels is that Italy can be an affordable place to live, too. Of course, it all comes down to lifestyle and what your overseas dream is; Italy provides something for everyone—from a budget retirement to a full-on dolce vita in an art city or a country villa. Here are my picks for enjoying the alluring lifestyle of Italy—on every budget.

The overall costs for groceries, utilities, and daily services are similar everywhere. Phone plans cost $20, high-speed internet runs around $35 a month, and property taxes are so much lower here that you will be shocked.

Rome is a spectacular world-class city, full of culture, history, and events. It’s also very pricey, like any major capital city. Luckily, the prices drop quickly when you venture outside Rome. Even just an hour distance opens up the door to bargain living in easy hitting distance of the city.

For the best bargains and lifestyle, head to the Viterbo province, where classic hill towns offer the Old World charm most expats crave, gorgeous landscapes, and low property prices. Viterbo itself is a provincial capital with a medieval old-town center that is spiked with towers, reminiscent of the more famous Tuscan town, San Gimignano, an opulent papal palace, cobbled lanes dotted with wine bars and eateries, and a lived-in feel. With a university, military base, and province offices, it’s an active place. There are also natural hot springs to soak in, Lake Bolsena nearby, and the Mediterranean Sea less than an hour away. The allures of Rome, Orvieto, and southern Tuscany are reached in an hour or less, too.

Rents start at $470 a month here. A beautifully renovated one-bedroom apartment in the center of Viterbo with designer and quality work is listed for $119,030. But there are also homes from $67,000 to $85,000 available, and they’re not tumbled-down wrecks, either.

Even lower prices are found in the lovely smaller towns scattered around the province. Caprarola, with the magnificent Palazzo Farnese crowning its summit, offers habitable houses for sale from $35,000. Sutri, Capranica, Vetralla, and Bagnoregio are other livable, affordable towns.

My own region in southern Italy is ranked as the most affordable in Italian cost of living surveys, and I can certainly agree. Housing is downright cheap, as long you look outside the region’s only two cities, and daily living expenses are low when we go to the mercato (market) for locally-grown produce and the supermarket. Dining out sets us back about $30 for heaping helpings of pasta, a side dish, and a good glass of vino. That’s for two. Granted, Rome isn’t in reach, but Salerno, Bari, and Naples are all within two hours. For those looking for a slow pace, a sense of community, an affordable lifestyle with the magnificent city of Matera as a cultural centerpiece, then you should look at this little-known southern region. They have a saying here that “hospitality is sacred” and they mean it—folks here are welcoming and embracing.

The landscapes are made up mostly of hills and mountains, with dramatic peaks, billowing wheat fields, and panoramas that should be rendered in paintings. Even our gorgeous seaside town, Maratea, called “the pearl of the Mediterranean” isn’t very expensive, with homes for sale starting at $180,000 for a renovated terrace home near the pretty port. The town exudes the atmosphere of the Amalfi Coast, but without the crowds (or prices) and the coastline is simply spectacular.

Go to the small towns around the region of Basilicata and home prices are downright bargains. Hill towns like Muro Lucano, Picerno, and Pisticci offer lovely old-world charm with habitable homes starting at $30,365. Pisticci also has a piece of sandy beachfront on the Ionian Sea, and even here you can snag a new two-bedroom condo just steps from the water for $133,605. It is in a complex with a garden and pool. The downside to village house hunting is most of the homes are for sale by owner and by word of mouth rather than listed with a realtor, so you’ll need to do some on-the-ground searching, but bargains can definitely be found for your efforts.

The central region of Marche dangles between mountains and the Adriatic Sea, offering the best of all worlds. In fact, it’s called “all of Italy in one region”—with rolling hills, wine country, soaring peaks, and miles of seacoast, it is definitely enticing. It is also often referred to as “the new Tuscany” and it does share some landscapes with that famous region. There just aren’t the high prices and influx of tourists to go with them.

READ ALSO :  Fauci praises Biden’s grasp of science: ‘There is no doubt it is better to have a smooth transition’

Le Marche isn’t undiscovered—there are plenty of expats here—but it’s not overrun, either, so prices haven’t soared. In essence, there is a lot to love about the homey lifestyle and beautiful places, and it fits a mid-range budget easily.

The travertine-built art city of Ascoli Piceno is an elegant choice, with proud residents and plenty of activity going on. It’s in a valley so walking and biking is easy. Here, nice rentals can be found for $550 to $700 monthly. A two-bedroom, two-bathroom townhouse is for sale for 167,613 in the center near the river. Go up the road to the ochre-colored hill town of Osimo, close to the regional capital city of Ancona, and just a half-hour from the Adriatic Sea, where a newly-restored two-bedroom apartment is for sale in the center of town for 94,738. If a farmhouse in the hills is your dream, there are plenty of those to choose from, as well, prices start at around $280,000 for partially-renovated homes. A good example is a farmhouse in the central hills with a separate guesthouse, with five bedrooms, an orchard and olive grove, and privacy, for $302,433.

Italy is a fabulous place to live it up, and live well, and if you can afford the villa in the country or the city penthouse, the comforts, culture, and lifestyle that attracted the likes of George Clooney and Sting can be yours to enjoy. If your budget is high, then consider these classic destinations for an enticing retirement.

The Coast or Capri

The glittery Italian Mediterranean coastline leaves many with indelible images of magical Italy at its coastal best. Pastel-painted seaside towns, green scrub-covered hills that tumble to the turquoise water, a color so deep and blue it seems impossible. Whether it’s the Riviera, the Amalfi Coast, or the set-apart isle of Capri that strikes a chord, they’re all gorgeous—and come at premium prices. But if you can afford it, the coastal life certainly has its beautiful rewards.

Rentals here are hard to come by, as most cater for tourists. Besides the daily cost of living being higher (those tourist prices certainly kick in around these areas), the price of real estate is at its premium. A restored 690-square foot apartment in the centro storico of Amalfi, near the Duomo, is on offer for $716,607. Need more space? A 2,200 square foot villa with four bedrooms, two bathrooms, a garden, and pool with sea views might fit your dream, for $1.82 million.

Across the bay on the island of Capri, prices are understandably even higher, but a dreamy destination to be sure. Here, an 807-square foot home looks at the evocative rocks at Marina Piccola, known as faraglioni, featured in postcards and films. The restored loft is beautiful, and comes with a community swimming pool. Price: $1.15 million. A condo in the town center near the shops and cafes is listed for $1.06 million for 968 square feet of renovated space that comes with two sunny terraces.

The center of western civilization for a few millennia, the Eternal City is at the center of the country and is certainly the beautiful centerpiece of Italy. Ancient and cosmopolitan at the same time, Rome has more sights than you can see in a lifetime. This is the place for those who love a daily-dose of art, culture, music, or shopping (or any combination of them), with tons of art exhibits at any one time, hundreds of churches packed with noteworthy masterpieces, museums aplenty, and music venues with concerts, operas and symphony notes to fit every taste.

This is also a place packed with cafes, wine bars, and restaurants that run from homey to uber-trendy, shopping districts that offer Italy’s top designers along with national (and international) brands, artisan boutiques, and open-air markets that bring in foods from all around the country (and beyond). In short, Rome is Italy’s sophisticated capital city.

It’s also one of the priciest places in the country, like any world city. Apartments in the city center average $835 per square foot for sales prices. Don’t expect to find a nice apartment in the centro storico for less than $2,000 a month. But what an exciting and culture-rich place to live if you can do it!

‘I’m still not on the Roth IRA bandwagon’: Have you made these tax blunders?