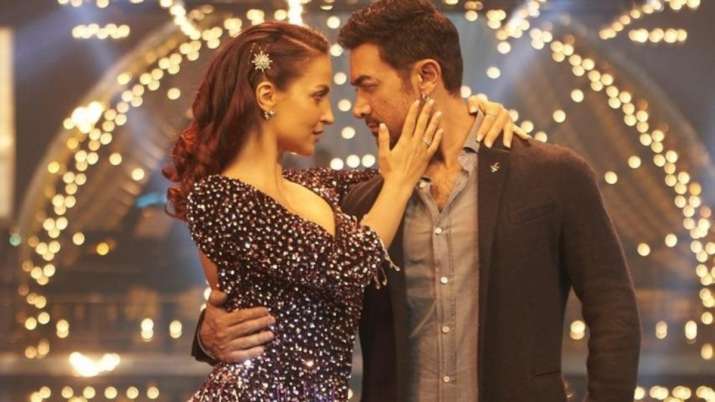 Aamir Khan and Elli AvRam’s, much-awaited music video titled ‘Har Funn Maula’ was released on Wednesday. The song is a part of the soundtrack for the upcoming film ‘Koi Na Jaane’. The lyrics of the song are penned by Amitabh Bhattacharya; music by Tanishk Bagchi. Shot in a club, this peppy number has both Eli and Aamir showing off some scintillating moves. The duo looks gorgeous too. While Aamir is seen dressed in a casual jacket, Eli has donned a shimmery dress and looks absolutely stunning.

Sharing the video on Twitter, Aamir also penned a congratulatory note for the team of ‘Koi Na Jaane’.  “Amin, my friend, you have come a long way since Lagaan. Wishing Bhushan, T-Series and you, all the very best for Koi Jaane Na! Really enjoyed shooting for this song, what an awesome team you have! Ceaser, Bosco, Manoj, Dipankar, Avan, Nanao, Rushi, Manoshi, Ballu, Adele, Tanishk, Vishaal, Zara, and above all, Elli, who hides all the flaws in my dancing 😉 And thank you Sneha, Vivek and Juhi, could not have managed without y’all Hope y’all like the song guys!” the actor wrote, adding, “The film is an exciting (hopefully! Amin don’t let us down!) suspense thriller called Koi Jaane Na, and is due for release in theatres on 2nd April.”

You can listen to the track here:

Aamir Khan will next be seen in the upcoming film “Laal Singh Chaddha”. The film is an official remake of the 1994 Hollywood hit “Forrest Gump”, starring Tom Hanks. Besides essaying the title role, Aamir has produced the film, which also features Kareena Kapoor Khan.

Laal Singh Chaddha directed by Advait Chandan is scheduled to release around Christmas this year.

With increasing COVID 19 cases, Priyanka Chopra Jonas begs all to stay at home

Kapil Sharma Gives Mazedaar Reply To A Person Taunting Him For Not Getting Angry On Twitter Anymore!

Even through the lockdown, Kapil Sharma is ensuring he entertains his followers. The actor-comedian retains sharing fascinating posts …
2