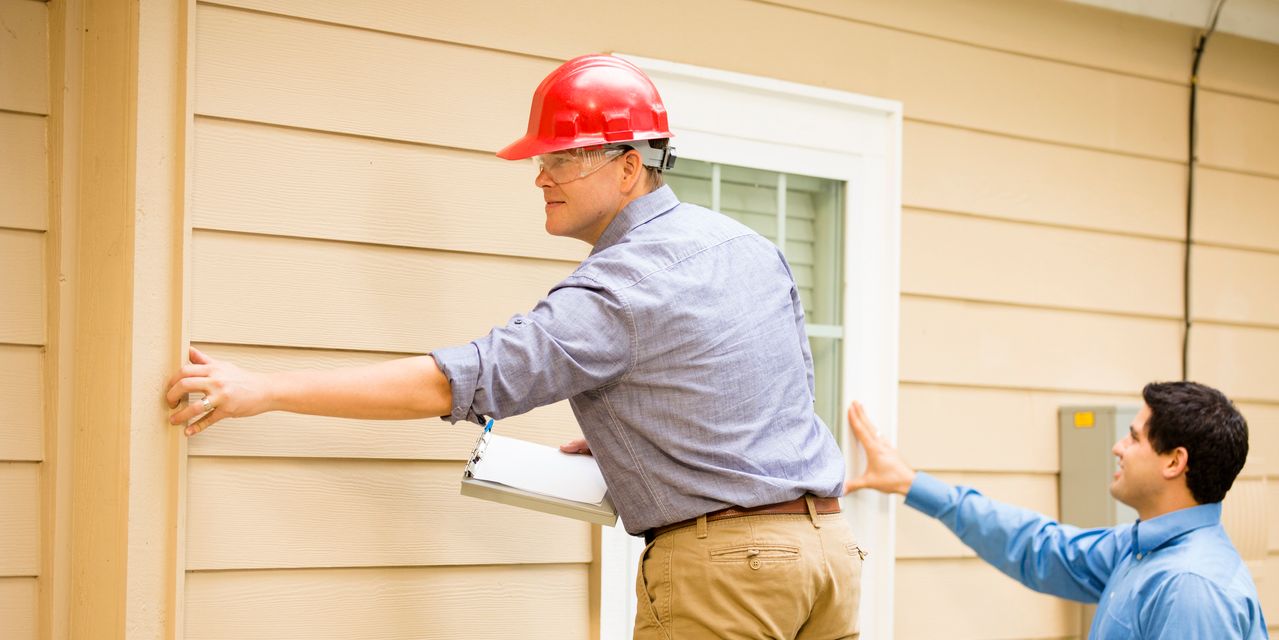 A federal watchdog agency is investigating ways to modernize
the process used to determine how much a home is worth.

The Federal Housing Finance Agency, which oversees mortgage giants Fannie Mae
FNMA,
-5.17%
and Freddie Mac
FMCC,
-4.17%,
issued a “request for input” on the policies and practices surrounding home appraisals. The regulator is seeking input on a range of proposals, including relaxing key standards that Fannie and Freddie require lenders to abide by for the loans they back.

“Modernizing the appraisal process has the
potential to create a more streamlined and accurate collateral valuation
process,” FHFA Director Mark Calabria said in announcing the request for information.
“But if modernization is not properly adopted, it could have negative
unintended consequences.”

Indeed, while the proposed changes could lead to time- and
cost-savings for consumers, experts told MarketWatch that taking the wrong
steps could disadvantage consumers, particularly people of color.

Appraisals can be a road bump in the home-buying process

Appraisals have major stakes for home buyers and sellers
alike. During a traditional appraisal, a licensed or certified appraiser visits
a property that will be backed by a mortgage, collects data on the state of the
home and then compares that data to other nearby properties. Lenders then use
the appraised value to determine how much to lend to the prospective borrower.

If appraisals come in lower than expected, it can jeopardize a sale if the buyer in question cannot make up the difference between the mortgage offered and the proposed sale price. But too high of an appraisal represents a risk, too: If home prices fall, it creates an even larger burden for the homeowner and mortgage lender alike, especially if the homeowner falls behind on their payments.

While appraisals are critical to the lending process, they can also slow things down.  Some argue that the nation has a shortage of qualified appraisers. Between 2014 and 2018, the number of appraisers nationwide dropped by more than 10%, according to data from the Appraisal Institute, an international trade group for property appraisers.

When mortgage demand increases — as it did this past year —
that can cause serious capacity constraints, with appraisals slowing down the
process to close a loan. Finding an appraiser can also be more challenging
depending on where someone lives.

“It’s a question of supply and demand. Turn times go up and down with the number of refinances and purchase mortgages taking place at any given time,” said Tom O’Grady, CEO of Pro Teck Valuation Intelligence, a property data and valuation firm.

“The ‘shortage’ appears to be seasonal, with more than
enough appraisers to service the communities during other time periods,” O’Grady
added. “Rural properties have always been a challenge due to the nature of the
location, as well as possible complexity of the appraisal assignment.”

Some argue that improper appraisals contribute to the racial wealth gap

Another criticism that has been levied against traditional appraisal practices is that homes owned by people of color often receive lower appraisals than homes owned by their white neighbors, even when factors such as property size and location are similar.

Last year, President-elect Joe Biden proposed creating more stringent standards for housing appraisals to ensure that professionals in the field “do not hold implicit bias” that influence their work. At the time, the appraisal industry argued these standards were already in place. “National appraisal standards and ethics requirements already require appraisers to perform their work with impartiality, objectivity and independence, without bias,” said Jefferson Sherman, president of the Appraisal Institute.

However, a report from researchers at the left-leaning Brookings Institution found that homes in similar neighborhoods with similar amenities were assessed as being worth 23% less in majority-Black neighborhoods, compared to areas with few Black residents. Altogether, this amounts to over $156 billion in losses for black homeowners, researchers found.

How to overhaul the appraisal process

To this end, the FHFA has suggested it is exploring a number
of fixes, including ones proposed by Fannie and Freddie themselves. These
include embracing automation technology that can produce faster appraisals
using existing data and allowing so-called “hybrid appraisals.”

Also known as bifurcated appraisal, a hybrid appraisal is one in which a trained individual conducts the home visit and gathers the necessary data. That information is then relayed to an appraiser working from an office, who does the computations needed to ascertain the property’s value. Many lenders already accept hybrid appraisals for some loans, and Fannie and Freddie have been exploring the process since 2018.

Beyond the attempts to modernize, the FHFA has also said it wants input on how much the appraisal contributes to racial discrepancies in home values.

The FHFA is also exploring the value of appraisal waivers.
Amid the COVID-19 pandemic, federal regulators and housing authorities, along
with Fannie Mae and Freddie Mac, have relaxed requirements for appraisals on
certain loans. While most new loans backed by Fannie and Freddie during the
COVID emergency featured traditional appraisals “these flexibilities provide a
way to protect the health and safety of industry participants, comply with
local restrictions throughout the country, and continue to provide liquidity
and stability to the market.” One of the considerations the FHFA is exploring
is whether to allow more permanent waivers for appraisals.

Changes to the appraisal process could save Americans time and money

Many of the changes the FHFA is considering are already in
practice — though it has yet to gain the official stamp of approval beyond a
pilot program for loans backed by Fannie and Freddie, which currently represent
over half the mortgage market.

For instance, Clear Capital, a California-based appraisal
company, has completed more than 120,000 hybrid or “modern” appraisals over the
past couple years, Kenon Chen, the company’s executive vice president of
corporate strategy, said.

The company has trained more than 700 people around the
country on how to do the on-the-ground aspects of the appraisal process, such
as measuring for square footage and sketching a home’s layout, and then
transmit that information to an office-based appraiser who does the necessary
computations to come up with a report. Many of the people doing the in-person
work for Clear Capital are real-estate agents and brokers, Chen said.

“As the technology gets better we think that it would be
easier to pull in other potential workforces as well,” Chen said. “COVID has
given us the opportunity to see what it would like to even gather data from
homeowners.”

Because of the time the hybrid process saves, Chen said that the hybrid approach has resulted in a 26% savings on average for mortgage borrowers. Appraisals can cost anywhere from $315 to more than $1,000 depending on the complexity of the project, according to HomeAdvisor.

Simplifying and speeding up the appraisal process can have
other savings-related benefits for consumers. During the pandemic, appraisals
were waived for refinance loans, in particular. Research has indicated that by
waiving the requirement for appraisals, this allowed more refinances to be processed
in 2020 by lenders.

“
For many homeowners, the increased use of appraisal waivers has provided a tangible financial benefit and helped them weather the economic stress of the COVID-19 pandemic.
”

Researchers at the Urban Institute looked at how often mortgage loans were prepaid in 2020 and compared it to past years — prepayments are a proxy for refinance activity. Their research found that falling interest rates alone didn’t explain the surge in refinance activity, suggesting that appraisal waivers played a role.

“For many homeowners, the increased use of appraisal waivers
has provided a tangible financial benefit and helped them weather the economic
stress of the COVID-19 pandemic,” the researchers wrote.

Modernizing the appraisal process could have unintended consequences

Critics of proposals to overhaul the appraisal process point
to a number of ways in which the changes the FHFA is considering could
negatively impact households across the country.

In particular, experts pointed out a number of concerns tied
to appraisal waivers. “The problem with a waiver is you don’t know what you don’t
know,” said Joan Trice, CEO of the Collateral Risk Network, an organizer of appraisers
and risk managers. “You didn’t send an appraiser into that house. How do you
know they didn’t gut it and run out of money? You have no idea.”

In this way, appraisers act as a line of defense for home
buyers and owners, preventing them from assuming more debt than their home is
worth.

And there are more ways in which waiving appraisals can
cause issues for the housing market. Once an appraisal is completed, the data
collected on that property is then fed into computer models that provide the
comp values appraisers compare to produce their next appraisal. Should the
number of waivers granted continue to increase, that could cause problems down
the road.

“If those appraisals are replaced with waivers it would be
logical to assume there will be less data to drive” the models in the future, O’Grady
said. And if a property goes uninspected, then changes to the state of the property
could go unnoticed, that “could have a dramatic effect on the overall market
value of the home,” O’Grady added.

In some cases, the negative consequences of the proposed
changes could depend on how they are enacted. With waivers, Trice expressed
concerns that more privileged homeowners could have easier access. “It’s mostly
white, wealthy people who get a waiver, and minority and the affordable housing
sector don’t get waivers,” she said. This could lead to disparate impact, she
argued, and could drive costs higher for the latter group if appraisers need to
make up for lost business.

“Now Fannie and Freddie have decided that they don’t care if
Uber drivers are entering your home and inspecting it,” Trice cautioned. “How
do they know that person is not a convicted felon if there’s absolutely no due
diligence on this group?”

Instead, Trice suggested limiting who could participate in a
hybrid appraisal. In particular, she sees this as a strong opportunity for
appraiser trainees. “Here’s a great opportunity for training to cut their
teeth,” she said.

Pune: Another minor fire breaks out at Serum Institute building amid…

FIFA unites with UEFA to warn clubs against breakaway league

Prev Next 1 of 4,810
You cannot print contents of this website.
Go to mobile version