“I just went for a test and we’ll see what happens,” Trump said. (File)

US President Donald Trump said late Thursday he would go into quarantine after a top aide tested positive for coronavirus, in a shock development that threatened to disrupt his scheduled public appearances in the crucial final weeks of the election campaign.

Trump confirmed in an interview with Fox News that Hope Hicks, one of his closest confidantes, had tested positive and added later on Twitter that he and First Lady Melania Trump were awaiting their own test results.

“She did test positive. I just heard about this. She tested positive,” Trump told Fox News.

“In the meantime, we will begin our quarantine process!” he tweeted soon after. His results are expected on Thursday or Friday.

Hope Hicks, who has been working so hard without even taking a small break, has just tested positive for Covid 19. Terrible! The First Lady and I are waiting for our test results. In the meantime, we will begin our quarantine process!

Trump did not say how long he was planning to be in isolation — he is regularly tested for the potentially deadly virus but the tests can yield false negative results.

It wasn’t immediately clear whether he would canceling his Friday schedule of campaign events, which includes a rally in Florida.

The Centers for Disease Control and Prevention recommends that people stay home and isolate for up to 14 days if they might have been exposed to the virus.

Hicks was traveling with Trump on Air Force One just this Tuesday to fly to Cleveland for the first presidential debate with Democrat Joe Biden.

She was also with him on the Marine One helicopter Wednesday when he flew back to the White House after a rally in Minnesota.

‘She wears masks a lot’

US media, citing unnamed sources, said Hicks was isolated on the journey back from Minnesota after showing mild symptoms and tested positive Thursday morning.

Trump says the United States has put the worst of the coronavirus pandemic, which has killed more than 200,000 Americans, behind and he rarely wears a mask, noting that he receives frequent testing. 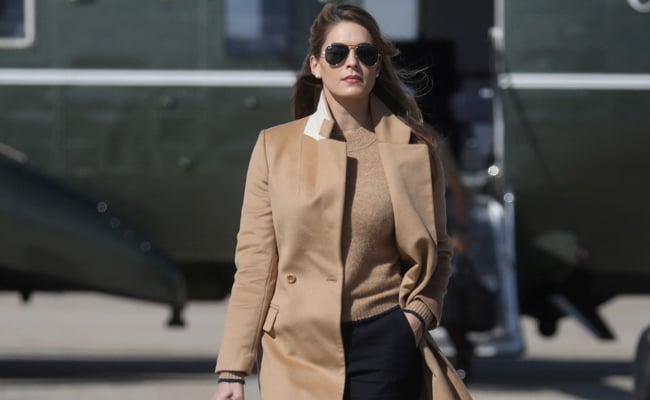 However, his own health experts have often given less rosy assessments and he has been sharply criticized by some for holding large rallies where few supporters wear masks.

Polls show most Americans disapprove of Trump’s handling of the pandemic, a potentially decisive issue ahead of the November 3 election battle against Democratic challenger Joe Biden.

Supporters have voiced concerns about the president’s backing in swing states like Michigan, Ohio, Pennsylvania and Wisconsin that Biden aims to reclaim after Trump won them in 2016.

Asked about Hicks before Trump’s comments, White House spokesman Judd Deere said “the president takes the health and safety of himself and everyone who works in support of him and the American people very seriously.”

Deere said the White House takes care to follow procedures “for limiting Covid-19 exposure to the greatest extent possible both on complex and when the president is traveling.”

(Except for the headline, this story has not been edited by NDTV staff and is published from a syndicated feed.)

Chinese Soldier, Held After He Strayed Into Ladakh, Handed Back