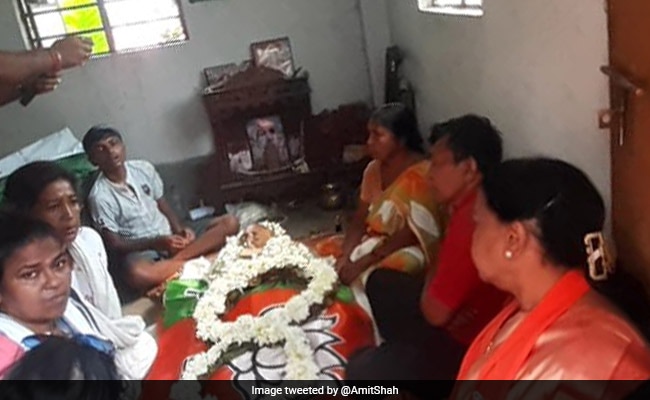 Ms Banerjee responded saying he had remained mum during brutalities against women in Uttar Pradesh, a state ruled by his party.

“I don’t know how the sister has died. We don’t support violence against women. We have never supported violence against my sisters and mothers…Amit Shah is tweeting and saying ‘Bengal ka kya haal hai‘. Why does he remain mum when women are attacked and brutalised in Hathras in Uttar Pradesh?” Ms Banerjee said addressing a rally in Nandigram.

Three Trinamool members, too, have been killed in the past few days, the Chief Minister said highlighting that the Election Commission now controls the state’s law and order.

A video of Ms Majumdar narrating her painful experience with a badly swollen face was shared by the BJP on social media last month. In his tweet today, Mr Shah posted the photo of her body wrapped in a BJP flag. Party chief JP Nadda, too, tweeted his condolences composed in Hindi, saying Ms Majumdar was “Bengal’s mother and daughter”.

Trinamool spokesperson Derek O’Brien tweeted that “the incident” was still under investigation.

The death of Shova Majumdar is a tragedy.
What is totally unfortunate though is the Home Min peddling a narrative when the incident is under investigation. He heads a Police Force & multiple Central Agencies. Shouldn’t he show some respect to the investigative process of India!

West Bengal on Saturday completed the first of its eight-phase polling for the next state Assembly, with the BJP and the Trinamool involved in a high-decibel, vitriolic campaign against each other.

Ready To Roll Out Vaccine Within 10 Days From Authorisation Date: Centre