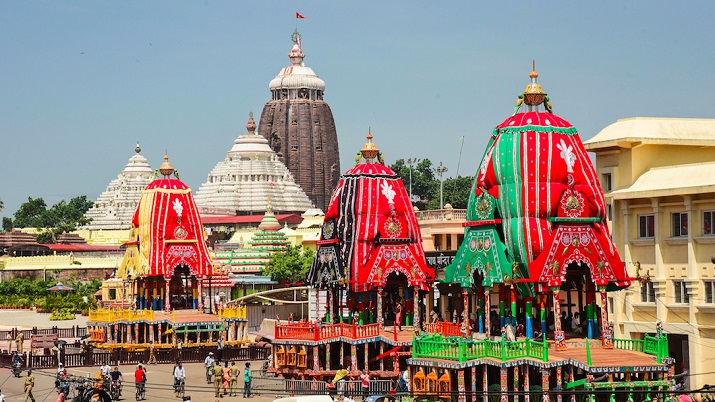 The Odisha government said on Saturday that the annual Ratha Yatra festival will be held this year without gathering of devotees, who will not be allowed to even watch the rituals from the rooftops along the route of the chariots. Speaking to reporters, Puri’s District Magistrate Samarth Verma said the administration has revised its decision, restricting public viewing of the Ratha Yatra festival from the rooftop of houses and hotels.

A curfew will be clamped in Puri town a day before the festival on July 12 and the restrictions will remain effective till the next afternoon, he said.


Verma said the festival of Lord Balabhadra, Devi Subhadra and Lord Jagannath was being organised without the participation of devotees for a second consecutive year due to the COVID-19 pandemic.

He urged the people of the holy town to witness the live broadcast of the festival on television as others. Verma along with Superintendent of Police KV Singh toured the 3-kilometer-long grand road during the day to take stock of the preparations.

There are 230 residential houses, and 41 hotels and lodges on both sides of the grand road, Singh said.

People may congregate on rooftops to witness the festival but the administration has decided to restrict such gatherings, he said.

Hotels and lodges have been directed not to take bookings from two days prior to Ratha Jatra, he said.

All roads leading to Puri will be sealed before the festival and people from across the state and the country are requested not to visit the holy town, the police officer said.

READ ALSO :  Lockdown to be relaxed in these areas of India

Meanwhile, after holding a meeting with the Chhattisa Nijog (apex body of servitors), Shree Jagannath Temple Administration (SJTA) chief administrator Krishan Kumar said that only COVID-negative servitors will be allowed to pull the chariots this time.

“Neither police personnel nor the officials will be allowed to touch the ropes used for pulling the chariots,” he said.

The police personnel will be allowed to pull the chariots before they are pulled on the return car festival, Kumar said.

The servitors will be provided with sanitisers, masks, napkins, medicines, glucose and ORS during pulling of the chariots, he said.

A few selected servitors will be allowed to be seated on the chariots when they are pulled, he said.

Further, the servitors’ body has agreed to allow the Archaeological Survey of India (ASI) to undertake laser scanning of the ‘Ratna Simhasan’ (the seat of the Lords) in the sanctum sanctorum and other places in the shrine when the deities are taken out for the festival, Kumar said.

“As the ASI does not have access to the sanctum sanctorum of the temple during the remaining period of the year, a comprehensive documentation of the ‘Ratna Simhasan’ through laser scanning will be done during this time,” ASI’s Assistant Superintendent Chitta Ranjan Das said.

The objective of the documentation is to record the condition, geometry, carvings, sculptures and statues of the ‘Ratna Simhasan’, he said.

This will enable the ASI to prepare a detailed drawing of the ‘Ratna Simhasan’ for repairs, if necessary in the future, he added.

The ASI has already started the process to install lights in a sequence on the Jagannath temple premises. “The estimated cost of the lightning project is Rs 1.5 crore. It will be completed in three months,” Das said.

Realme GT 5G launched globally: Check everything to know about the Realme device

New Delhi (Anish Yande): Realme GT 5G has been launched globally. The GT 5G was unveiled at a …
1

A look inside a shelter home for stranded workers in Noida

Bhubaneswar: The Odisha authorities has imposed a whole shutdown in Puri district from 9 p.m. on Monday until 2 …
0