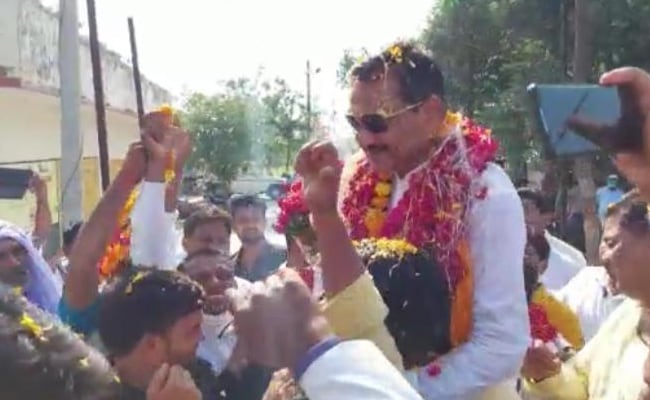 The BJP is set for a massive victory in local body elections in Uttar Pradesh, in a big setback for Akhilesh Yadav’s Samajwadi Party. The BJP has surged ahead with a projection of winning over 60 seats in the zila panchayat chairperson election where 75 seats are at stake. Mr Yadav’s party is forecast to win only six seats.

In comparison, back in the same election in 2016, Mr Yadav’s party took 60 of the 75 seats. Those analysing the elections, however, say the local body polls are unlikely to be any indicator of which direction the wind will blow in the assembly election next year, which will also serve as an ultimate test for Chief Minister Yogi Adityanath of the BJP. Yet, the local body elections are being keenly watched.

Prime Minister Narendra Modi tweeted about the win: “The glorious victory of BJP in the UP District Panchayat elections is the blessing given by the people for development, public service and rule of law. The credit for this goes to the policies of Chief Minister Yogi Adityanath and the tireless hard work of the party workers.”

Twenty-one BJP candidates and one from Samajwadi Party got elected unopposed earlier. Uttar Pradesh has some 3,000 zila panchayat members. This election will choose chairpersons for the state’s 75 districts.

Leaders getting elected unopposed in local body elections in UP is not new. In 2016, half of the 60 seats that Samajwadi Party won in the zila panchayat chairperson polls were elected unopposed. Mr Yadav was the Chief Minister then. A year later, BJP swept the state in the assembly election.

The 1992 demolition was preceded by a series of rath yatras by the BJP’s LK Advani. Lucknow: The …
0

Apple Store Online to launch in India on September 23, the company confirmed today. The online store will …
0

Coronavirus Lockdown: Lakshmi Sahu and her household are biking 500 km from UP to Chhattisgarh Lucknow: Hours after …
0

When actor Gaurav Dixit returned to his building and saw the NCB team, he fled the scene. Mumbai: …
0