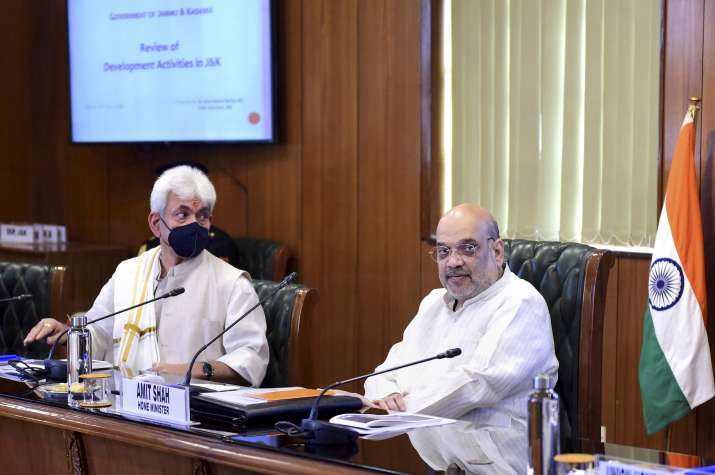 Union Home Minister Amit Shah on Friday reviewed various development projects being implemented in Jammu and Kashmir and said all-round development and welfare of the people of the union territory is the top priority of the Modi government.

Shah also appreciated the 90 per cent reach of various central government schemes in Jammu and Kashmir and complimented Lieutenant Governor Manoj Sinha and his team for covering 76 per cent of the population under the COVID-19 vaccination drive, including 100 per cent in four districts.

He said all-round development and welfare of the people of Jammu and Kashmir is the top priority of the Modi government.

The home minister impressed upon officials for speedy completion of the prime minister’s development package, flagship and iconic projects and industrial development projects, the statement said.

The home minister directed to ensure the benefits of the refugee package to all the refugees from Pakistan-occupied Jammu and Kashmir, West Pakistan and those who had to migrate from Kashmir to Jammu at the earliest.

Shah directed starting of the 3000 MW Pakal Dul and Keeru hydroelectric projects and fast-tracking of other such projects.

For strengthening of Panchayati Raj Institutions and Urban Local Bodies, he directed officials to immediately organise training for the members, making proper sitting arrangements for them and providing equipment and other resources to the personnel for smooth functioning of these bodies.

Along with this, the home minister also directed the panchayat members to visit various parts of the country so that they can get information about the working of developed panchayats of the country.

He stressed on increasing the scope of MGNREGA to provide employment to more and more people.

At the same time, he spoke about the use of modern techniques in agriculture to increase the income of farmers and to set up at least one agro-based industry in each district.

He also said that work should be done to increase the quality and density of apple production in Jammu and Kashmir, so that apple growers will receive maximum price for the crop.

Ensure farmers get benefits of scheme

Shah directed the Jammu and Kashmir administration to ensure that all farmers are provided benefits of schemes being implemented for farmers, such as Pradhan Mantri Kisan Yojana, under which Rs 6,000 is deposited annually directly into the accounts of farmers, and Kisan Credit Card Yojna, etc.

He said that it should be ensured that the benefits of the industrial policy reach small-scale industries.

The home minister appreciated efforts for providing employment to youth and institutional reforms like geo-tagging of all development works that are put in public domain, purchasing through Government e-Marketplace (GeM) and direct deposit of money into bank accounts of almost hundred percent beneficiaries of Gram Swaraj, social security and other individual beneficiary schemes.

READ ALSO :  ‘A year of historic firsts for Indians’: PM Modi in letter to citizens

Sinha and senior officers of the central government and the government of Jammu and Kashmir attended the meeting.

Image Source : PTI Farmers hoist flags at the Red Fort during the tractor rally violence amid the …
0