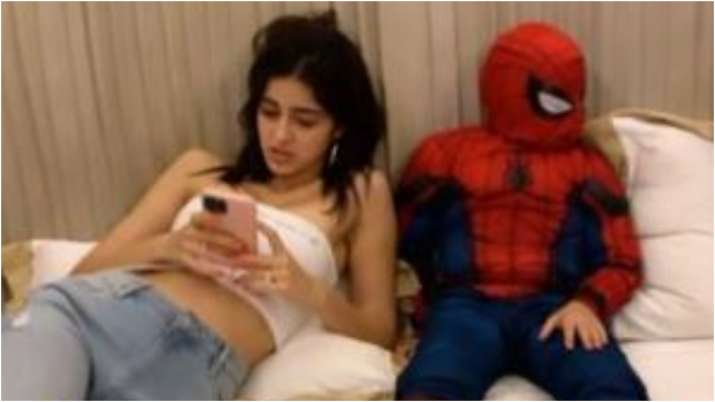 Shah Rukh Khan‘s lil one AbRam turns a year older today. The toddler is SRK and Gauri Khan’s youngest son and is immensely popular among the ladies just like his father. People love his cute antics and he’s super adorable when he poses with his family on public outings. On AbRam’s special day, actress Ananya Panday, who shares a close bond with the toddler’s elder sister Suhana Khan took to social media to share an adorable post for the birthday boy.

Taking to her Instagram stories, the actress posted a picture of AbRam sporting a Spider-Man suit. She rests beside him in a white crop top and comfy denims as she is scrolling something into her phone. “Happy birthday Baby Bram,” Ananya wrote over the photo. Take a look:

Not only, on AbRam’s birthday, sister Suhana Khan also shared a special post for him. She took to her Instagram stories to share an unseen pool video. It shows the brother-sister duo enjoying pool time and AbRam pecking his elder sister’s cheek while she takes the video.

Along with the video, Suhana Khan wrote ‘birthday boy’ with an awe-struck emoji. Check out the video here-

AbRam, son of Shah Rukh and Gauri Khan, was born through surrogacy in May, 2013. His elder siblings Suhana and Aryan are currently studying in the US.

Coming back to Ananya Panday, the budding Bollywood star has her plate full with big upcoming projects. She will be seen in the film “Liger” opposite Telugu star Vijay Deverakonda. The film has been directed by Puri Jagannnadh. Produced by Karan Johar, the film is scheduled to release on September 9.

Shah Rukh Khan will be soon back on The Big Screen. Wishes fans A Happy New Year

Shah Rukh Khan is not just a name but a brand in today’s time. He is an actor, …
0